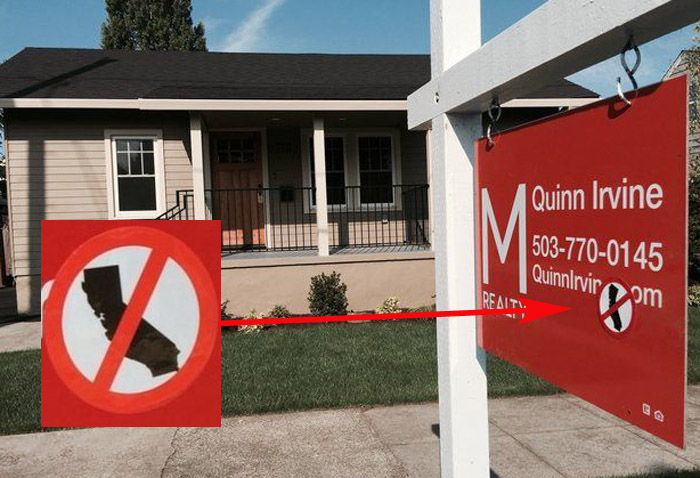 Realtors in Portland are reporting[1] that stickers dissing Californians are being slapped on their for sale signs all across the city as Portlandia reacts to an invasion from La La Land.

Portlanders apparently upset with the direction of the local housing market are slapping “no Californians” stickers on For Sale signs in the city, real estate agents say.

When one of realtor Lori Fenwick’s buyers sent her a picture of one of the stickers, she took it to a real estate group on Facebook to see if any other agents had seen them around town.

Three other realtors replied they had. One of them was Quinn Irvine, of M Realty. Somebody plastered one of the stickers – showing a silhouette of California with a “No Smoking”-like red slash through it – on his sign outside a house on North Burrage Avenue.

“A lot of these homes are going into bidding wars and going over ask price,” Irvine said. “And a lot of these guys are getting outbid. And I think they’re going around to agents who have properties that have sold over ask price and putting anti-California stickers.”

That right there is funny, I don’t care who ya are.