Hillary Comes UNHINGED – Loses It On Debate Stage After Bernie Says THIS!

Hillary just felt the Bern big time![1] She got up in last night’s Democratic debate and accused Sanders of running a smear campaign against her. Sanders led the audience in boos against the shrew. It almost brought a tear to my eye it was so epic. I congratulate the little elderly moppet commie – he nailed her, but good. Bernie Sanders kept it fairly clean and congenial… he merely eviscerated the Hildabeast by pointing out that Bill Clinton took megabucks and let the big banks loose by killing the Glass-Stegall Act, which some analysts say led to the 2008 financial collapse. Hillary didn’t stand a chance in Bernie’s inferno. But she did come unhinged and you could tell she was royally pissed off. It’s not a good look for her. 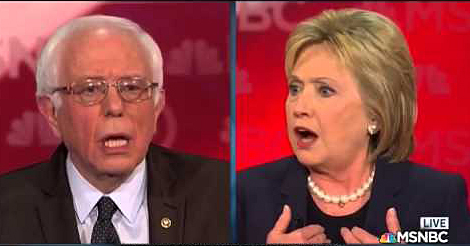 After a brutal week that saw her disastrously trying to defend[3] millions in “speaking fees” from Wall St. banks, Hillary Clinton tonight came completely unglued, and turned her rage on her rival Bernie Sanders.

But it backfired almost immediately…

Hillary felt the Bern, and the boos.

I find it so very interesting that both parties are more consumed with attacking within their own ranks rather than attacking the opposing party that they have lost sight of the fight to come for the presidency. Bernie Sanders laid this right at Clinton’s doorstep and even if she wins the nomination, which is in severe doubt these days, that will be used as ammo by the other side against her relentlessly. As Obama has redefined unemployment and once again laughingly claimed that the unemployment rate has dropped to 4.9%, while over 100 million Americans remain out of work, Progressives battle it out on which is more corrupt and which is more communist. It’s surreal. This election just gets more and more popcorn-worthy.