Last week, before she announced her run for the White House, Hillary Clinton had a secret meeting with various members of the Old Media establishment to properly program them with her talking points. Now we know who attended to receive their indoctrination. Naturally, they were all tried and true left-wingers. 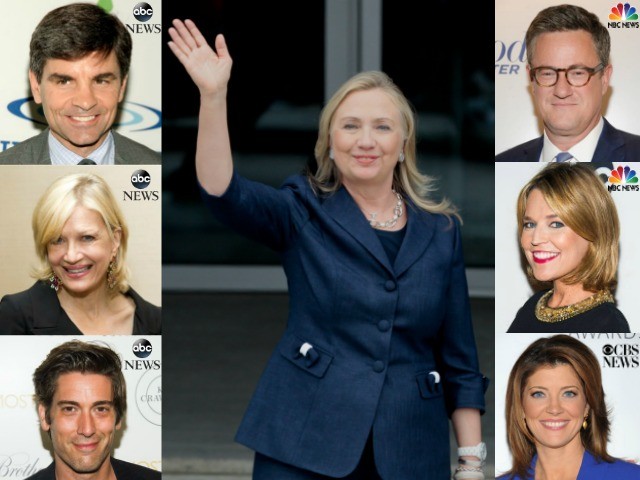 Clinton and her team took the time to hand deliver[1] many of the most well known “journalists” her talking points.

ABC’s George Stephanopoulos, MSNBC’s Joe Scarborough, and a half-dozen reporters from CNN were reportedly among the media elites that attended an off-the-record New York dinner with Hillary Clinton’s advisers on Friday evening ahead of her Sunday campaign announcement.

According to CNN’s Brian Stelter, ABC’s Diane Sawyer, David Muir, and Stephanopoulos, who was Bill Clinton’s White House communications director and originated the “war on women” narrative against Republicans and Mitt Romney during the 2012 campaign, CBS’s Norah O’Donnell, NBC’s Savannah Guthrie, who recently asked one-sided questions to Sen. Rand Paul (R-KY) unlike the softballs she threw at President Barack Obama during a pre-Super Bowl interview, MSNBC’s Scarborough, who relishes every opportunity to bash Republicans to be in the good graces of NYC-DC elites, MSNBC president Phil Griffin, Politico’s Mike Allen, and reporters from CNN, which has been accused of being the “Clinton News Network,” were among those who attended the dinner, which Clinton pollster Joel Benenson reportedly hosted.

This was only one of two known secret meetings that Hillary hosted with members of the left-wing media establishment.

At the other meeting Clinton and her operatives also met with propagandists from The New York Times, The Washington Post, Politico, The Wall Street Journal, The Associated Press, Bloomberg, McClatchy, Reuters and several major TV networks.

So, it looks like the media has received its marching orders. So we got that going for us. Which is nice.