Hillary Panics After THIS Video Is Released

Perfect timing and Hillary will indeed panic over it…[1] and curse it and rage against it. Dinesh D’Souza is releasing a new movie called ‘Hillary’s America’ this July I believe, just before the elections this year. Good times. In the movie, Dinesh covers the true history of the Democratic Party. The racism, genocide, infanticide and the thuggery that is the legacy of the Democrats. The legacy that has resulted in Hillary Clinton. She indeed wants to steal America and finish her off… changing her into something none of us ever dreamed of or wanted. Dinesh asks, “Who are these Democrats?” They are the Progressives, Marxists, Socialists, Communists and radicals that have been slowly placing themselves in positions of power for decades. All the while undermining our Constitution, our country’s moral bedrock and the principles of the Founding Fathers. D’Souza will tear the mask away and show you the true face of the Democrats and Hillary and it is horrifying. 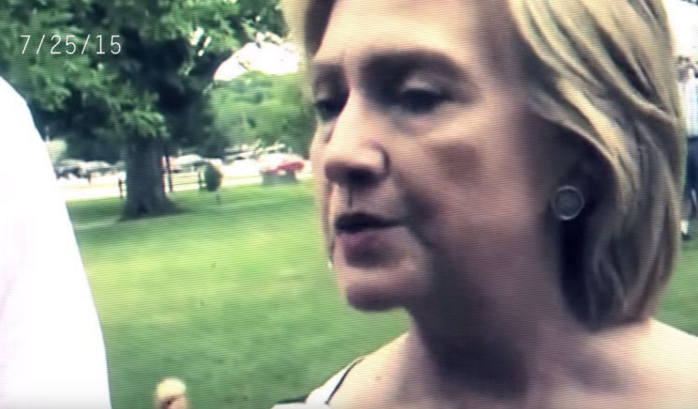 In 2012, writer and political commentator Dinesh D’Souza released his movie 2016: Obama’s America. Four years later, he is set to release his second film, Hillary’s America, just in time for the upcoming election.

The movie will focus on Clinton, her scandals, and the true past and current motives of the Democrat party.

“Who are these Democrats?” D’Souza asks in the opening line of the trailer, amidst a backdrop of parking lot assassinations, Klansmen on horseback, and an ominous figure standing in the Oval Office. “It’s time to go behind the curtain and discover the soul of the Democratic Party.”

When Obama threw D’Souza in prison to silence him, he did not know that it would make him double down and speak even louder. But it did and I am glad that was the result. You can either cave to political persecution or you can fight back twice as hard. D’Souza does not disappoint… the man has a lot of courage and determination in the face of evil. “It all began when the Obama Administration tried to shut me up,” said D’Souza. “What did I learn? All crime is about stealing. The big criminals are still at large. The system doesn’t go after them, because they run the system.” The trailer ends with D’Souza asking, “What if the goal of the Democratic Party is to steal the most valuable thing the world has ever produced? What if their plan is to steal America?” They pretty much already have. I say we take it back.