Obama’s Attorney General, Eric Holder, has been the most lawless AG in American history. He has also been the most nakedly political and hatefully ideological and partisan. But some members of the House don’t want him to just ride off into the sunset now that he is resigning. Some want to bring Holder up on charges[1]. 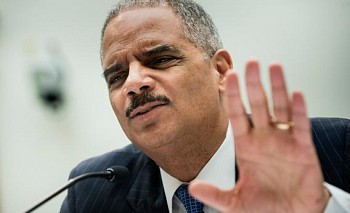 No AG in history has ever deserved to see the inside of a jail cell more than this cretin.

From Attorney General of the United States to a prisoner? It’s possible for Eric Holder.

The United States House of Representatives has launched numerious investigations into the conduct of the Barack Obama Administration. Many times the target of those hearings has been Eric Holder.

The first suggested penalty is a daily monetary fine, with the possible escalation to prison time if he remains in contempt and refuses to comply. According to Politico, “House lawyers even suggest it may be necessary to throw the attorney general in jail to get him to abide by the court order.”

Me, I doubt this all will ever happen. But it sure would be nice.