IDIOCY! Kamala Harris Lists 3 Functions Of Gov’t, ALL WRONG – Gets Schooled By Americans

Kamala Harris wants to be the Democratic nominee for the presidency in 2020. This idiot can’t even name the functions of our government and was jumped all over for revealing her cluelessness. She listed them as: “A government has three functions: public health, public safety, and public education. The GOP budget doesn’t prioritize any of them.” Wrong. Harris has no idea what the Constitution says, nor does she care. The three functions she names are all communist talking points. And this woman is a US Senator from California… why am I not surprised.

I’d almost be embarrassed for her if she wasn’t such a pretentious, Marxist witch. She definitely removed all doubt concerning her being a fool. Not that we had much to begin with. The basic functions of the United States government are listed in the Constitution. They are: ‘To form a more perfect Union’; ‘To establish Justice’; ‘To insure domestic Tranquility’; ‘To provide for the common defense’; ‘To promote the general Welfare’; and ‘To secure the Blessings of Liberty’. 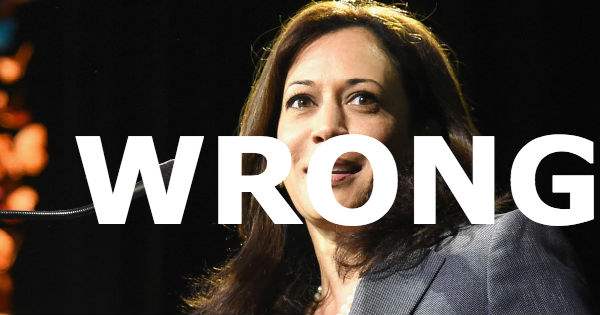 Perhaps she is confusing the three branches of government with their functions. I wonder if she knows them either… the Legislative branch, the Executive branch and the Judicial branch. None of those are responsible for what she listed either. It’s more likely that these are things that Democrats WANT the government to be responsible for. That’s not constitutional… that’s totalitarian in nature. Quick, someone get this woman a copy of the Constitution and a dictionary! A brain might help as well. Forget about the soul… she sold that long ago.

Babysitting Marxists is not a function of government. Handing out freebies and redistributing wealth is not a function of government. You do not have a constitutional right to healthcare, or to education or even to safety. You do have a right to be free and fend for yourself… that means work and make your own way, Kamala. I know it’s hard for you to grasp, but liberty entails taking responsibility for yourself and your circumstances. It does not entail the right to demand that the government take care of you.

If Kamala Harris truly cared about the functions of our government, she would support defending our borders, putting Antifa down, strengthening our military and reducing our national debt. She doesn’t care about any of those. Her concerns are planks in a communist political agenda. She is yet another useful idiot in a long line of them aiming to remold the US into a communist Utopia. In other words, she’s a dolt and a liar.

A government has three functions: public health, public safety, and public education. The GOP budget doesn’t prioritize any of them.

You ever read The Constitution? Because it doesn’t seem like you have…

Wrong, Wrong, Wrong! This government is defined by the U.S. Constitution for a reason.#KamalaBHO[4]– she's just not too bright.#PaTHeDiK[5].