The illegal Mexican immigrant who brutally murdered a woman at random while walking on San Francisco’s Pier 14 said that despite being deported back to Mexico for crimes in the past, he knew if he went to San Francisco he wouldn’t be arrested there because ‘Frisco is a so-called “sanctuary city.” 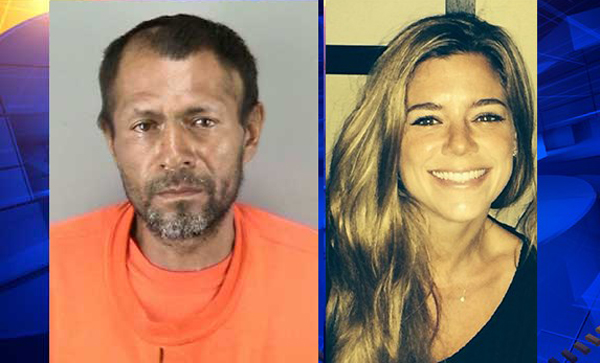 In a new interview[1] with San Francisco’s ABC 7, murderer Francisco Sanchez claimed that he “accidentally” shot Kate Steinle with a gun he “found.” The criminal illegal said he fired it three time “accidentally” and then threw the gun off the pier and into the ocean, lit a cigarette, and calmly walked away.

But more importantly, Sanchez said that despite being deported from the USA five times he kept coming back because American businesses continue to hire illegals to work.

Worse, he told ABC that he went to San Francisco because he wouldn’t be arrested because San Francisco is a “sanctuary city.” He he knew he was safe there.

Now, on a side note, imagine this situation. We have a couple in Oregon who our illicit courts have gagged and told they aren’t allowed to speak in public about a $135,000 fine they’ve been given because they won’t bake a gay cake but this illegal immigrant who murdered someone gets an interview on ABC!!

THIS is how far America has fallen from what is good and right.