IN Gov. Pence on Religious Freedom Law: ‘This Avalanche of Intolerance That’s Been Poured on Our State Is Outrageous’

The hypocritical outpouring of leftists hating on Indiana’s new Religious Freedom Restoration Act is amazing for how filled with lies it is. After all, most states have this same law or laws just like it. Now Indiana Governor Mike Pence is sticking to his guns and saying that the “avalanche of intolerance that’s been poured” on his state is “outrageous.” 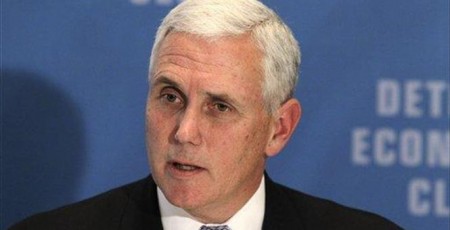 The gov. recently appeared[1] on ABC’s “This Week” with George Stephanopoulos and refused to bow to Stephanopoulos’ BS attack on him, his state’s law, and the state itself.

“George, look, the issue here is, you know, is tolerance a two-way street or not?” Pence told ABC’s “This Week” with George Stephanopoulos on Sunday.

“I mean, you know, there’s a lot of talk about tolerance in this country today having to do with people on the left. But here Indiana steps forward to protect the constitutional rights and privileges of freedom of religion for people of faith and families of faith in our state, and this avalanche of intolerance that’s been poured on our state is just outrageous.”

Pence said the bill he signed is not about discrimination, nor is it about disputes between individuals unless government action is involved. He said the law is intended to empower individuals (as well as churches and businesses) when they believe the government is trampling on their religious freedom by requiring them to do things they oppose on religious grounds.

Critics say the new law will sanction discrimination against homosexuals.

“The Religious Freedom Restoration Act was signed into federal law by President Bill Clinton more than 20 years ago,” Pence noted. “And it lays out a framework for ensuring that a very high level of scrutiny is given any time government action impinges on the religious liberty of any American.”

Way to stay on point, Gov. Pence!! Great job of refusing to accept the false premise of the liberal news media.

All these attacks are part of the gay agenda, naturally, and the sold out, left-wing media is only too happy to comply.