Invoking the Holocaust, Sanders Vows to Fight Islamophobia… Jihadists, Not So Much

By all indications[1], Bernie Sanders is a Jew-in-name-only. He’s all but said he’s an atheist. Sanders hugged a Muslim student and recounted to them that his father’s family had died in the Nazi concentration camps. Then he went on to vow that he would fight and stop Islamophobia. Not fight Jihadist terrorism which is targeting the Jews, seeking to implement Shariah Law and force the Caliphate on the planet. Nope. Bernie seems to not understand what the word ‘racism’ means. Instead, he is defending a murderous theological construct in the name of inclusiveness. Huh? It’s one thing to defend a religion as a whole, but to pander to all within that system, even those who are blatantly radicalized, is nothing short of suicidal. Feel the Bern. 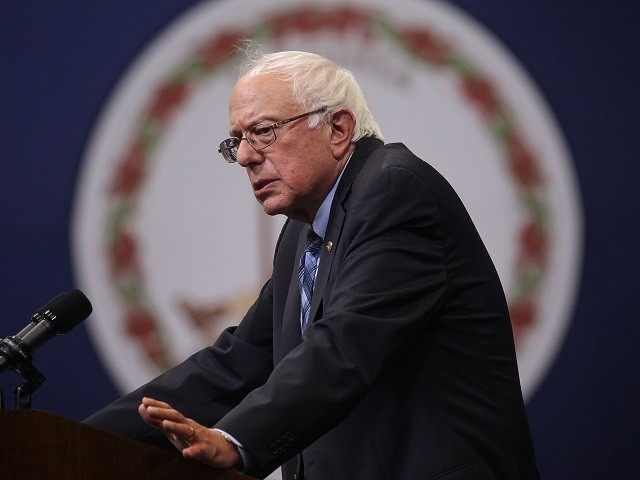 “Let me be very personal if I might. I’m Jewish, my father’s family died in concentration camps,” Sanders said. “I will do everything that I can to rid this country of the ugly stain of racism that has existed for far too many years.”

It’s ironic that Sanders would invoke the Holocaust in saying that he would fight against “Islamophobia,” since during World War II, the Islamic world aligned with Hitler. Haj Amin al-Husseini[4], the Grand Mufti of Jerusalem and effectively the leader of the Muslim world, raised Muslim armies for Hitler, waged war on behalf of the Nazis in Iraq, and conducted pogroms against the Palestinian Jews in the British Mandate of Palestine.

It also bears mentioning that the Muslim world never apologized for its role in the Holocaust. Instead, it continued to pursue Hitler’s objectives, and Mein Kampf has for years been a perpetual bestseller in Egypt[5], Turkey[6] and elsewhere[7] among Muslims.

“Sanders,” according to The Hill[3], “chronicled racism and discrimination’s historical roots in American culture, arguing that groups have always tried to play one group off against each other.”

Playing one group against another? Is that how he describes the war waged by the Axis Powers against the Allied Powers during World War II? And as for today, the only groups that are trying to play one group against another are Islamic groups such as the Hamas-tied[8] Council on American-Islamic Relations (CAIR), which works energetically to stigmatize legitimate resistance to jihad terror as “Islamophobia.”

The Hill[3] tells us that Sanders was speaking at George Mason University, and that “the Democratic presidential candidate was interrupted many times by cheers from the friendly crowd.” Of course: college students all over the country are indoctrinated with pro-jihad, anti-American ideas day in and day out. It is no surprise at all that they would be so susceptible to Sanders’ silly narrative of Muslim victimhood.

“There are some out there who think, ‘Well, students and young people are apathetic, they won’t get involved, they are busy partying and so forth,’” said Sanders. No, there are those who rightly think that students in colleges, and young people in general, are being relentlessly indoctrinated with uber-leftist/Islamic propaganda.

Sanders concluded: “What you are saying here tonight is that you love your country and you are going to fight as hard as you can to make this the country we know it can be.” If he were really serious about that, he would have called upon those students to defend Constitutional principles against sharia encroachment. He would have stood up for the freedom of speech and the equality of rights of women and non-Muslims – all denied under sharia. He would have explained to them that it is not “Islamophobia” or “racism” to defend freedom from those who would impose sharia here, and not improper to ask a Muslim presidential candidate to renounce the aspects of sharia that are incompatible with Constitutional freedoms.

Instead, under the guise of rejecting “racism,” Bernie Sanders and his ilk are opening the door to the demise of those freedoms.

To embrace enforced refugee resettlement; to cave to open borders and Amnesty; and to use the term ‘Islamophobia’ to force the acceptance of all facets of Islam on those who do not agree, is in a word, un-American. You are enforcing the freedoms of many who are not Americans and for those that would rip up our Constitution apart and start over, against free Americans who have worked their whole lives to keep this country free and prosperous. Our universities have become Marxist and radical breeding grounds. They are little more than recruitment centers for radical activists and terrorists. Bernie would know a lot about that as he supports that very thing. The anger America is expressing involves being subjected to a coup from within and without… an invading force that is being enthusiastically welcomed by our leaders that will change the face of America demographically and politically forever. It is the loss of our sovereignty and freedom we object to. In the name of those slaughtered by monsters such as Hitler, who was empowered and encouraged by the Muslim Brotherhood, Sanders is condoning and embracing those who would murder the Jews and Christians yet again. It is beyond disgusting.