Is This The Best We Can Do?

It seems that Republicans’ plans to stick to the issue of Obamacare right up to the midterm elections are falling through, as Congressional leadership – including and especially Speaker John Boehner – have renewed their push for “comprehensive” immigration reform.:  This is a losing issue for Republicans, so it begs the question of why the top politicians in the party would be stupid enough to keep hammering the issue time and time and time again.

The goal, so they say, is to find a bipartisan compromise to solve our nation’s problem with illegal immigration (or undocumented migration, or “acts of love,” depending on who you ask).:  Of course, Democrats are on board with comprehensive immigration reform, as would be a vehicle to bring citizenship to millions of Mexican citizens who crossed our border illegally – and whose political leanings tend leftward.:  The Democrats’ goal is clear: they want to add millions of new Democrat voters to their roles.:  And while this might have the positive effect of cutting down on voter fraud, that is only because the Democrats won’t need to stuff the ballot boxes in order to win elections anymore.:  The Republican Party will face permanent minority status.

House Majority Whip Kevin McCarthy has also expressed a desire for comprehensive immigration reform[1], but in his opinion, we need to provide legal status to these illegal immigrants, but stop short of full-fledged citizenship.:  Personally, I find this notion ridiculously naive.:  If the House puts together a reform package that stops just short of citizenship, the Senate will alter it to include full citizenship.:  We have already seen multiple times how today’s Democrats, in leage with their allies in the media, have been able to outmaneuver the GOP on several different issues, no matter how right the Republicans were on the issue.:  If it comes down to quibbling over “legal status” vs. citizenship, that is a battle Republicans will lose.

This November’s elections will be extremely important for the Republican Party, as it is their last chance to take back the Senate during Barack Obama’s presidency.:  By pushing so hard to get immigration reform through before the elections, John Boehner seems to be doing all he can to work against his own party and hand the 2014 elections to the Democrats.:  But for the party leadership, their focus seems to be more on the threat to their own power from within the party.:  Boehner would rather give conservatives the middle finger[2] than to do what is necessary to keep the GOP relevant. 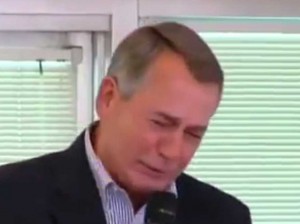 Instead, the thing Republicans should be focused on when it comes to immigration are the illegal actions of President Obama, and the inherent dishonesty of the Democrats.:  When the Democrats put forward the “Dream Act,” which would have provided legal status to younger illegal immigrants with no other criminal past, it was voted down.:  In fact, it was voted down more than once.:  What did President Obama do?:  He made it his administration’s official policy.:  It’s bad enough that this president feels that he has the power to change the law based on his whims, but he apparently also feels that he can enforce laws that Congress votes down, just because he wants to.:  But in the end, all it adds up to is one more illegal, unethical action taken by this president that the Republicans will do nothing to stop.

They should also stay focused on border security – you know, the bone they always throw to conservatives to get them to back a bad immigration bill, and never follow through on once the law is signed. : If all of the various laws passed over the years had been faithfully enacted, our border would be secure by now.

The GOP’s last big national electoral win was in 2010, when the Tea Party generated enough enthusiasm among conservatives to take control of the House.:  Ever since then, party leadership has done everything they can to oppose conservatives, and they lost the 2012 presidential election as a result.

Now that true conservatives have had enough, and have started fighting the leftist wing of the Republican Party with several primary challengers, we see these RINOs’ true colors.:  When their power is on the line, they will side with the Democrats over their own party.

When did we go from being the party of small government to a party that accepts the ruin of our healthcare system: and seeks to hand the Democrats a victory[3] that will have repercussions for decades to come?