The Muslim ISIS forces invading Syria and Iraq continue to prove that the “religion of peace” is mere brutality and barbarism with its latest display of inhumanity by murdering hundreds of captured Syrian soldiers and beheading captured Kurds. 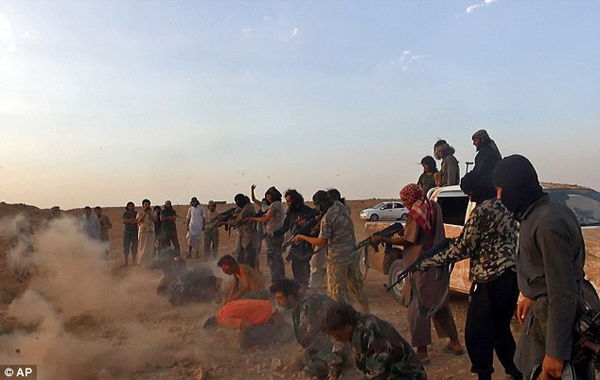 The Daily Mail has some shocking and disturbing[1] videos and photos of the carnage.

Islamic State have released a new decapitation video, threatening America for the second time and urging the Kurds to break from their alliance with the West against the caliphate.

Just hours after Islamic State released shocking footage of the mass execution of 300 Syrian national army soldiers in the Syrian desert, Islamic State have issued a second warning to the United States.

The grainy video, accompanied by the hashtag ‘2ndAmessagetoAmerica’, shows the vicious beheading of a Kurdish soldier, who was part of a group of 15 fighters likely to have been captured by Islamic State during the fighting in Iraq.

The group’s first warning ten days ago was entitled ‘A Message to America’ and showed the decapitation of American journalist James Foley.

Meanwhile, Obama goes to parties and attends fundraisers and tells America “We have no strategy[2].”