It is being reported that an outbreak of the flesh-eating virus has hit members of the terror group ISIS in their stronghold city of Raqqa, Syria. 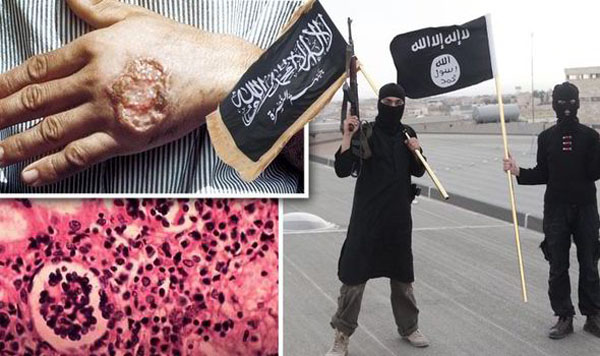 Apparently over 2,500 cases[1] of the virus have been reported in the terror stronghold and the killers have no idea how to contain it.

Efforts are reportedly being made to prevent the further spread of the Leishmaniasis skin disease, which is highly virulent, in the IS stronghold.

Although organisations began work to combat the disease, this became impossible after IS is claimed to have closed down their city offices.

They also confiscated equipment and arrested officers trying to help fight the condition which can be deadly.

The first case of the disease, which is caused by protozoan parasites, was discovered in September 2013.

By the middle of 2014 500 people had been affected, according to a network of activists ‘Raqqa is Being Slaughtered Silently.’

This is hilarious news. May the wind of a thousand flies bring them all Leishmaniasis!