Jeb Bush has revealed that he is anti-Israel, says leading conservative talk show host Mark Levin. The radio talker says that two things show that Bush seems to be setting himself up as the anti-Israel candidate. Bush is anti-Israel not only for picking well-known Jew hater James Baker as a top advisor but for letting Baker give a headline speech at an anti-Israel conference last weekend. 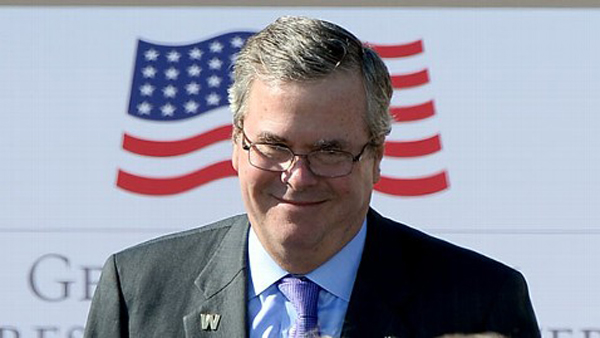 Baker, Levin says, is a well-known hater of Israel. But that Bush allowed him to give this speech[1] is pretty blatant.

The annual conference of the activist group J Street features an array of anti-Israel speakers, including proponents of the Boycott, Sanctions, and Divest (BDS) movement, which seeks Israel’s destruction, and advocates for the terrorist group Hamas.

Jeb Bush’s selection of Baker as a foreign policy adviser has sparked concern among conservatives and in the Jewish and pro-Israel communities. Baker is infamous for his hostility to Israel, having said during his tenure as secretary of state in the George H.W. Bush administration, “F—k the Jews, they don’t vote for us anyway.” Baker is also a supporter of President Obama’s Iran negotiations.

“Jim Baker, much like Barack Obama, has always had a hate on for Israel,” Levin said. “This antipathy toward Israel is well documented. Baker wanted the U.S. to punish Israel for destroying Iraq’s Osirak nuclear reactor [in a 1981 airstrike]. He hated Netanyahu as early as 1990, barring him from entering the State Department’s building. And last but not least, Baker co-wrote the Iraq Study Group’s 2006 paper that recommended among other things that the United States tilt its foreign policy away from Israel and toward Syria and Iran—advice that Obama seems to have taken to heart.”

“This is the guy, the leading advisor to Jeb Bush on foreign policy, who Jeb Bush asked to be his leading adviser, and now he’s the keynote speaker to this left-wing hate group J Street,” Levin said.

Do we want an anti-Israel president like the one we already have?