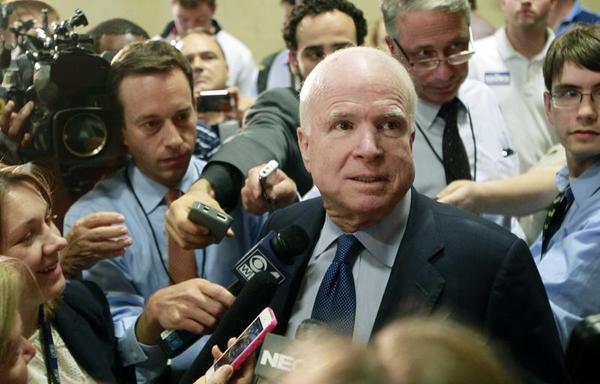 John McCain is the quintessential enemy from within on the right. I am long past the argument of honoring his service to this country. He served his country long ago with distinction, now he’s serving it on a platter to the Communists. At every turn[2] he has betrayed America in recent years. Just two words describe the good he has done this country: Sarah Palin and she is Tea Party. Now, in an act of political cleansing[3], McCain has set about to gut the Arizona GOP of Tea Party riff-raff using an Obama San Francisco donor[4]. How richly appropriate for a man who is a Marxist Progressive and much more of a friend to the Leftist policies of Barack Obama than to the Constitutional Conservative premise of Ronald Reagan.

Behold the machinations of the troll that is McCain[5]:

As the longtime Republican senator lays the groundwork for a likely 2016 reelection bid, his political team is engaging in an aggressive and systematic campaign to reshape the state GOP apparatus by ridding it of conservative firebrands and replacing them with steadfast allies…

The ambitious effort — detailed to POLITICO by nearly a dozen McCain operatives, donors, and friends — has stretched from office buildings in Alexandria, Virginia, where strategists plotted and fundraisers collected cash for a super PAC, to Vietnamese-American communities across Arizona, where recruiters sought out supporters eager to help the incumbent defeat the tea party.

McCain is much more likely to be besties with the likes[6] of Arizona Rep. Kyrsten Sinema. You remember her… she endorsed a Communist Party May Day appeal back in 2002. She did it again in 2003. He probably also hearts Arizona Rep. Raul Grijalva who penned an article for the Communist Party paper back in 1993. Don’t forget the fascist moves of La Raza either in the Red State of Arizona. Arizona has big problems on the Left and the Right.

I don’t believe McCain ever really intended to win his last run for President. I think he wanted to enable Obama and taint Palin. If he had employed even a fraction of his time fighting for conservatives that he spent fighting against them, he might have occupied the Oval Office:

Until this year, however, McCain aides had never seriously considered a concerted effort to remake the state GOP apparatus, which has traditionally been dominated by his conservative antagonists. That changed after the January censure, which rapped the senator for having an insufficiently conservative record that was “harmful” to Arizona.

“He was very unhappy with the censure and wanted to make sure it never happened again,” said Mike Hellon, McCain’s deputy campaign manager in 2010.

In the days after the state party’s rebuke, a group of top McCain political hands, including Jon Seaton and Christian Ferry — who worked for McCain in his 2008 campaign and have remained with him since — hatched a plan to form a super PAC that would spend money to elect a more friendly slate of precinct committeemen.

The super PAC, which was based out of offices in the Washington, D.C., suburbs and Phoenix and given the generic name “Arizona Grassroots Action PAC,” raised nearly $300,000. The largest checks, according to contribution reports, came from Gregory Maffei, a Colorado businessman, and Gregory Wendt, a San Francisco-based financial adviser, both longtime McCain donors.

But the most stunning part of a story linked to Politico’s puff piece: McCain’s big purge[7], has to be the money behind McCain’s move[8]:

Greg Wendt and Lisa Wendt of San Francisco, CA (generous benefactors of the Democrat Party and its candidates) gave over 40% of the funds for Grassroots Arizona; a PAC set up to target the Republican chairman of legislative district 11.

Greg and Lisa have been very generous to Democrats. Greg has donated to such people as Ron Wyden, Max Cleland, Barack Obama, Diane Feinstein, and Claire McCaskill, among many other Democrats.

Though some of these links go back to 2006, Wendt is still giving large amounts to Arizona Grassroots Action PAC who is funding McCain.

The other donor you should note here is Greg Maffei from Colorado. He’s a bud of Colorado gun control Governor Hickenlooper[9]. He gave 100k to the anti-Tea Party war chest for McCain.

This is nothing new for McCain. He’s been doing it for as long as I can remember. He is roundly despised by true conservatives in Arizona and with good reason. If you are an out-spoken critic of him, he destroys you, or at least he tries to. Ethics be damned. McCain is for McCain and the wealthy elites in Arizona and those he pals around with. He’s despicable and has no morals or sense of decorum. He has stood for Amnesty and for just about every Progressive platform out there. The only one left in the State of Arizona that hearts McCain is freshman Senator Jeff Flake[10], who I have serious issues with. He is a Progressive as well and is the only Republican to travel with Democrats to Cuba on junkets and profess his admiration for a Communist regime. ‘Nough said there for now.

And what brought on[11] the ire of this corrupt politician who counts himself as a good friend to Barack Obama? He’s out for payback for the those that backed his embarrassing censure earlier this year[12]. He’s paving the way for a possible 2016 run.

McCain’s team has been busy tolling away to reform the state party by forcibly removing hostile Tea Party-aligned members from local GOP offices and replacing them with allies ahead of the senator’s 2016 re-election bid. He’s at war with the Tea Party and McCain is taking no hostages.

Under the byzantine rules of Arizona Republican Party politics, these elected officials, known as precinct committeemen, vote for local party chairmen. The chairmen, in turn, determine how state and local GOP funds are spent, which candidates are promoted in an election year, and which political issues are highlighted — all matters of central concern for McCain heading into 2016, when the threat of a primary looms.

Prior to Aug. 26, when the races for the party offices were held, the vast majority of the 3,925 precinct slots were filled by people McCain’s team considered opponents. Now, after an influx of candidates were recruited by the senator’s allies, around 40 percent of those offices — 1,531 to be exact — will be held by people McCain’s team regards as friendly. They will have the power to vote down hostile Republican chairmen in each of their respective localities.

“There’s been a huge organizational effort that I’ve never seen before,” said Gordon James, an Arizona public relations executive and longtime McCain confidant. “A lot of the party folks who were hostile to John McCain have been marginalized, and that’s a good thing.”

The biggest foe to fall: Timothy Schwartz, the man who authored the McCain censure resolution. Earlier this month, Schwartz was ousted from his post as a GOP legislative district chairman by a group of newly elected precinct committeemen who voted in favor of a McCain-aligned candidate. Another outspoken McCain detractor, A.J. LaFaro, recently announced that he wouldn’t be seeking reelection to the Maricopa County Republican chairmanship, a tacit recognition that he didn’t have enough support to win.

And from the Inquisitr[14]:

The resolution was passed by a 1,150-to-351 vote. The Tea Party vote listed a number of what the party called “disastrous” and “harmful” policy decisions toward Arizona and the country. The “liberal” policy record he holds included votes for amnesty, and a refusal to defund Obamacare are among the charges. The amnesty charge comes from the fact that Arizona is border state, and the issue has been boiling over the past several years. The Inquisitr reported on the ongoing fights over illegal immigration[15].

The wording of the resolution was very serious and stern in its declaration[16], the Arizona Repubic reports.

“Only in times of great crisis or betrayal is it necessary to publicly censure our leaders. Today we are faced with both. For too long we have waited, hoping Senator McCain would return to our Party’s values on his own. That has not happened.”

Along with McCain’s jabs at Sarah Palin, who can forget his infamous labeling of Ted Cruz and Rand Paul as wacko birds[17] last year. Or when he called them ‘Tea Party Hobbits[18].’ He haaates the Tea Party – McCain despises the independence and freedom it stands for, along with the Constitutional precepts of limited government and taxation, as well as the rights that are inherent to all Americans. McCain went to the dark side of politics long ago. As Investor’s Business Daily[19] sagely points out… purges may work in totalitarian states, but not in a Constitutional Republic. Republicans would do well to remember that, unless of course they relish living under the heavy hand of a dictator. Cavorting with the enemy leads to becoming the enemy.

McCain believes with his money, power and influence he can rule Arizona and the nation at the tender age of 78. He’s a megalomaniac of epic proportions. But does he really think the patriots of the Tea Party will just roll over and wet themselves? If he does, he’s even more delusional than I thought. Schwartz, the ousted McCain foe, hinted that Tea Party forces were planning on a counterstrike after the holidays. He didn’t provide specifics, but trust me… it is coming. “They think it’s over,” Schwartz told Politico. “But the fat lady hasn’t sung.” Indeed, this big boy is just warming up – let’s dance. If McCain wants a war with the Tea Party[20], he’s got one. 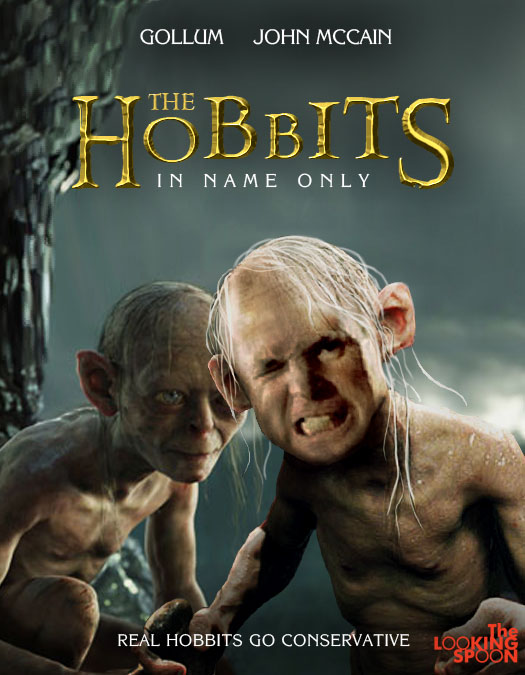