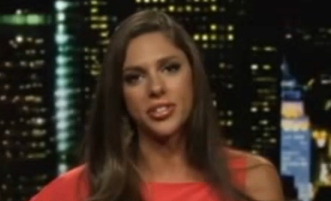 **UPDATE: : Abby Huntsman emailed the Daily Caller earlier this afternoon[2] and said the acceptance to attend the DNC convention was a joke.

“That was just fun back and forth banter with Governor Granholm,” she told TheDC on Wednesday. “I’ve always been a Republican, but like many Americans right now, I feel without a home this election cycle.”

Appearing: on the liberal network Tuesday night[3], Huntsman laughed and said, “I will join you there,” when Granholm suggested she and other “independent and moderate Republicans” join the Democratic Party.

Yet, this harmless banter back and forth isn’t the first time the Hunstman clan had broke with the party. : Last June, she gave a less than complimentary remarks about Sarah Palin[4]. : Matt Hadro of the Media Research Center transcribed the exchange:

CHRISTINE ROMANS: What is — what is the problem here for him and his party?

ABBY HUNTSMAN: Well you know, like — like Ali Velshi said earlier, you know the candidates are lying about the economy, and that’s not the case necessarily in what we’re talking about. But I think he’s frustrated with the party. They are — like you said, they are not being inclusive. They are not talking about these big, bold ideas. And there are a lot of people that feel the same way that he does and it’s because of the lack of leadership that we are in this position today.

And I think — I am very proud of my dad, because I think he is standing up for what a lot of people feel is a problem today, this lack of leadership, this lack of boldness that is so desperately needed in the party. That is — we don’t have it today.

ROMANS: So do you think he is speaking for moderate Republicans?

A. HUNTSMAN: I think he’s speaking for a lot of Republicans, and you know Independents and Democrats even. This is about — this above politics. This is about the country.

Lacking bold ideas? Really? : The Ryan Budget is a bold proposal[5] that is our best chance in getting our nation’s fiscal house in order. Furthermore, Democrats haven’t passed a budget in over 1,000 days, which shows they have no clear vision for the country. : House Republicans have sent almost thirty deficit reducing, regulation cutting, and job creating bills to the Senate, which are tabled by Harry Reid. : A politician who has resorted to lying about Romney’s taxes to help the president’s political agenda. : Obama’s campaign goons have accused Romney of being complicit in the death of a steel worker’s wife in a new ad by Priorities USA[6]. : Mayor Cory Booker, a surrogate of the Obama campaign, has been thrown into the doghouse[7] for criticizing the barrage of anti-Romney ads attacking his tenure at Bain Capital. : Yet, we’re the intolerant ones.

I don’t know why Jon Huntsman and his family continue to make a mockery of their own party. : Ho[8]ward Kurtz wrote back in April on some possible scenarios:[9]

: –He’s really ticked off at the GOP for failing to see the brilliance of his candidacy.

–He feels he damaged his reputation with his short-lived presidential run and is doing some repair work.

–He’s bored and wants some attention.

Whatever the motivation, Huntsman is more interesting, and entertaining, right now than he was while slogging through New Hampshire, where he tried–and failed–to turn a third-place tie into a semblance of momentum.

Maybe former candidates are inherently more fascinating when freed from the constraints of having to pander to actual voters. Or maybe he’s just looking for a gig on MSNBC.

However, when the party has an intense anti-Obama sentiment flowing through its veins, it’s not smart to have letters praising the current Democratic president or that of his predecessors. : It also doesn’t help your presidential ambitions when, as Daniel Allot wrote in The American Spectator: [10]back in January, you break:

…One of the cardinal rules of modern American politics…[the] popularized the 11th Commandment…never speak ill of another Republican.

Huntsman broke what could be called the 12th commandment of modern Republican politics: never speak well of a Democrat. But Huntsman didn’t speak well of just any Democrat. He complimented the three Democrats most loathed by Republicans: Barack Obama and Bill and Hillary Clinton.

When he resigned as ambassador to China, Huntsman wrote a short note to Obama, thanking him for the chance to serve. He referred to Obama as “a remarkable leader[11]” and wrote, “it has been a great honor getting to know you.” He even underlined the word “remarkable.”

In another letter, Huntsman had kind words for President Clinton and Secretary of State Clinton, calling the former’s analysis of world events “brilliant.” 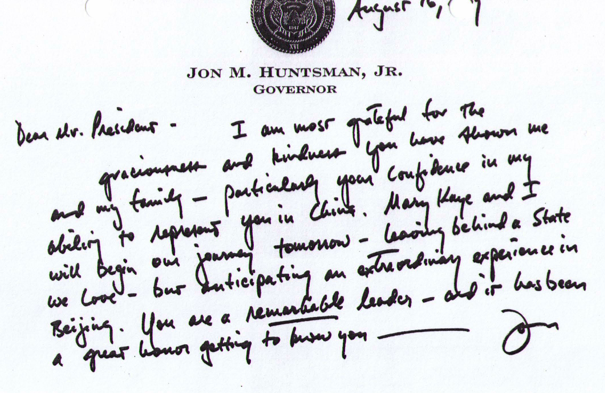 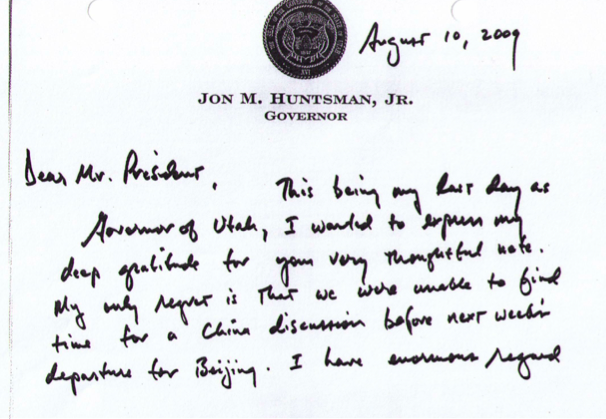 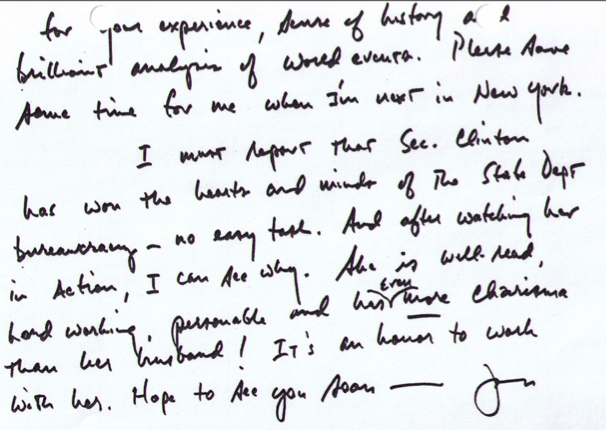 A nice letter to Bill Clinton

We’re an inclusive party. : We’re the party of ideas that more associated with the Madisonian experiment of limited government and the American entrepreneurial spirit. : It may not have appeared that way in the past, but since the Tea Party has become the heart and soul of the GOP; I have more hope for the future of the conservative movement.

Personally, I liked Jon Huntsman. I think his vast foreign policy experience will make him a great choice for Secretary of State if Romney is elected president. : Sure, there were some things I thought he could have been more to the right of, in terms of policy, but he is a solid Republican overall. I just don’t know why he thinks it’s appropriate to bash the political organization that is best suited to deliver the reforms needed to keep up fiscally healthy and militarily robust abroad. : However, it looks like the Huntsman clan is moving towards the exit concerning their membership with the Republican Party.