Uh, oh. This is bad, bad news[1] for Hillary Clinton and the Clinton Global Initiative. Looks like Obama and his Administration have basically turned their backs on her and she is getting the cold shoulder. Big businesses are pulling their support like crazy as well. All the scandals are taking their toll. From emails, to currying favors and bribery, Clinton is damaged goods and many are jumping ship as fast as they can. I can’t blame them. No one really wants to go down with the USS Hillary. Clinton is being dropped like a hot potato by leaders, kings, presidents and prime ministers to boot. She’s too toxic to be anywhere near these days. But the woman acts like her ascension to the presidency is inevitable still. Ill or delusional… take your pick. The world is just not that into Hillary Clinton anymore. 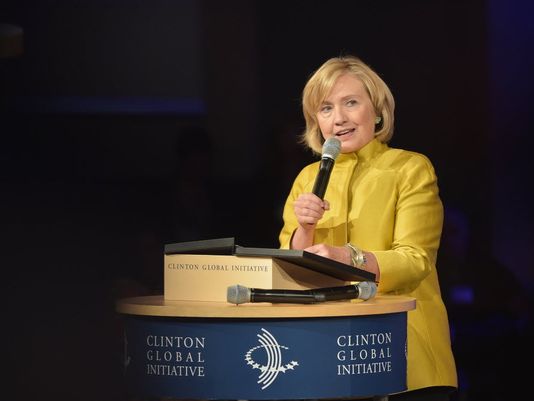 Deutsche Bank and HSBC, and accounting firm PwC (PricewaterhouseCoopers). Hewlett-Packard, which just announced major layoffs, will be an in-kind donor instead of a cash contributor, and the agri-chem firm Monsanto has cut back its donation. Dow’s name is missing from the donor list as well, but the chemical company’s exit is not confirmed.

High-profile corporations might not be the only key supporters backing away from association with the Clinton family’s charitable arm. In 2014, eight national leaders, kings, presidents and prime ministers, appeared on the program for CGI’s annual meeting, including the president of the United States and the prime minister of Japan. This year, only leaders from Colombia and Liberia are currently on the program.

The Obama administration is backing away as well. In 2014, the cabinet officials heading the Environmental Protection Agency and the Department of Commerce, as well as key White House adviser Valerie Jarrett spoke at the conference. This year no Obama administration appointees as prominent are on the program.

In emails, Craig Minassian, chief communications officer of CGI, said that more speakers and sponsors are yet to be announced. The event will be attended by nearly two dozen heads of state. “Revenue is actually slightly better than last year … so there isn’t a decline in support,” he wrote.

Unless there is a sudden surge in high-profile corporate support in the coming days, the exodus of well-recognized brands could represent a setback for the Clinton campaign’s effort to maintain an aura of inevitability. Questions about ill-considered private email use while secretary of State and about the former first lady’s honesty already dog her efforts in Iowa and New Hampshire, where she is no longer considered a sure winner.

The corporate skittishness could be driven by a politically toxic atmosphere around the charity. Controversy over foreign donations to the Clinton Foundation while Clinton was secretary of State has tarnished the globally prominent foundation’s reputation. Some reporting has raised concerns that corporations and foreign governments were trying to curry favor with Clinton in an effort to influence government decision-making. The sluggish global economy could be a factor as well.

In any case, the corporate pullouts can’t be a morale builder for Team Clinton, where personnel have shifted freely among campaigns, government service and the family foundation.

It is not all bad news. According to the foundation website, Microsoft has increased its donation to the event and well-known retailer GAP, Inc. has joined the roster, but other names signing on are unknown to most Americans: Consolidated Contractor Company, a Middle East construction firm; Delos, a real estate company; and Cheniere, a natural gas pipeline and terminal company.

As in years past, a number of widely known corporate brands are sticking with sponsorship of the Clinton event. Barclays, CocaCola, P&G, Cisco, Goldman Sachs and Western Union remain sponsors, as they were in 2014. Senior executives from other companies, including Sodexo and Unilever, will appear on stage. And non-profit support for the event has not dropped off.

New details about corporate pullout from The Washington Examiner.

A Clinton Foundation official told USA TODAY that the changes in sponsorship are not out of the ordinary and that this is not a new trend. But the high-profile turnover appears greater than usual. Last year, Samsung, Monsanto, PWC, HSBC and Blackstone were added as sponsors of the CGI meeting, while Duke Energy, Pfizer, Booz Allen, ApCo Worldwide and Toyota left. The companies that joined tended to donate at higher levels. For example, HSBC joined at the $1 million “Convening Sponsor” level, while Booz Allen, Toyota and Pfizer ended donations at the lowest level of giving, “Meeting Sponsor,” representing donations of $250,000.

It’s a long way until Election Day, but the corporate rejections are another sign that all is not well for Clinton Inc.

Never fear, Microsoft rides to the rescue. They’ve increased their donations and the GAP has crawled back into bed with Clinton. But so many others have left the building and I doubt they will be back. Joe Biden must be literally salivating over this development. Bernie Sanders was already handily trouncing Clinton in Iowa and New Hampshire, now this. The media is still in it for her though – never say die as a Marxist. I still expect more fallout over the foreign donations issue. You can’t take dirty money from China and the Middle East the way she has and not leave a trail. Her enemies will use that alone to finish her off politically. Hillary reminds me of the kind of person who is convinced everyone loves her and then is totally shocked when they turn on her like a pack of wolves and pounce. She’s evil and clueless. In other words, a politician.