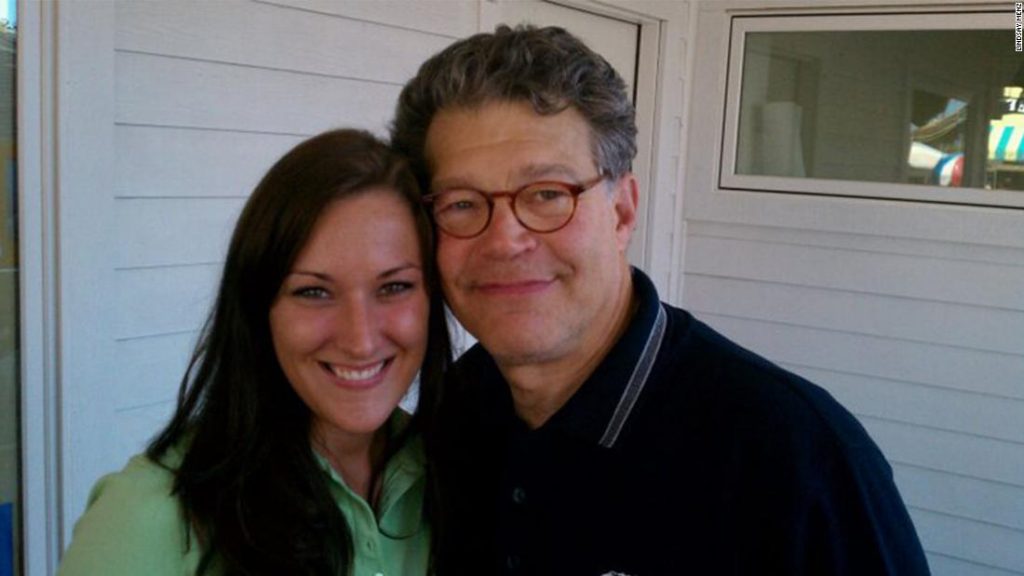 Al Franken, Democratic Senator, is now faced with another allegation of sexual misconduct in 2010, while he was an elected official.

Franken’s handsy hands were made news last week when former model turned radio host (and conservative who is married to an Air Force Pilot) Leeann Tweeden provided photos showing that Al Franken had groped her without consent while she was joined by him on her 9th USO tour back in 2006. She further alleged that he had forcefully kissed her and stuck his tongue down her throat[2]. The only mild saving grace was that at the time, Franken was not yet a Senator. He took over his Minnesota seat in 2009 and has been married to his wife Franni since 1975.

But the new allegation is from 2010, vanishing any previous excuse that he was just some guy at the time, not a Senator.

Lindsay Menz is now a 33 year-old woman who currently lives in Texas and decided to go public after hearing Leeann’s story, saying that she wanted to share what she felt was a “gross” and “uncomfortable” interaction with Franken. The incident took place while posing with the Senator for a photo at the Minnesota State Fair. While attending the fair with her father and her husband back in 2010, she spent the day working at a booth held by a local radio station, owned by her father, which was sponsoring the fair. Lindsay and her husband both gave details on what happened when Franken visited their booth, saying that Al “pulled [Lindsay] in really close” and “put his hand full-fledged on [her] rear” as her husband took the photo of the two. She said his hand was “wrapped tightly around my butt cheek,” not on her hip or side or waist, and the clutch lasted three or four seconds.

At the time, she told her husband after that, “he totally grabbed my butt.” So far, Franken said that he feels “badly” that Lindsay felt like she had been disrespected and that he takes “thousands of photos” at these events and so doesn’t remember the picture.

As for social media, the left continues to eat their own and many of them have been denouncing Al Franken. Last week, an op-ed in the New York Times[3] by Michelle Goldberg suggested that Franken should resign, even if she took the entire article to get around to that point, first stopping to complain about Donald Trump and to cry that Franken had been such a good champion of feminists.

Here’s Jonathan Chait, a writer with a new book praising Barack Obama coming out in January, who also writes for the New York magazine and he is even getting in on it:

I think Franken probably could have survived a single-episode accusation that predated his political career. This looks like a death blow. https://t.co/3pPR1YO8gw[4]

And some conservative takes:

Just a reminder that we still have no actual proof of the Roy Moore accusations.

We do however have photo proof of Al Franken groping a sleeping woman and NOTHING has happened to him.

Not only do we have photographic evidence of him molesting one victim, but a second woman alleges that Al Franken groped her, too.https://t.co/V6ntO7hVgH[7]#AlFranken[8] #MondayMotivation[9]