And now for the female version[1] of Barack Obama. Minus the street smarts and the charisma that is. Oh, and the electability. Rumor has it Hillary Clinton is handing the Democratic baton to Kamala Harris, who will run in 2020. Meh. She’s an extreme Marxist and a freshman senator out of California. Donors are buzzing all around her and the wealthy who once threw cash to Clinton are now schmoozing with Harris. SICKENING.

According to one fundraiser, she’s ‘absolutely’ running for the presidency. She raked in a ton of cash at the posh Hamptons in New York this last weekend. That’s where wealthy leftists go to mingle. She’s a former prosecutor-turned-California attorney general and the Dems see her as their savior suddenly. The woman is shrill and hateful. She’s a witch. I can’t imagine her as president in a sane world. But we don’t live in one anymore, so who knows. 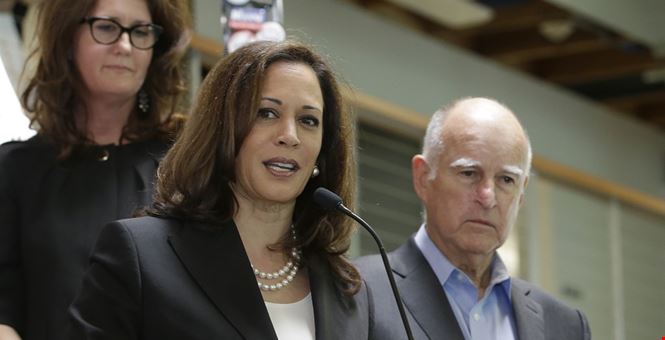 The Democratic donor class is abuzz about Kamala Harris after the freshman California senator was feted this weekend at an event in the Hamptons surrounded by top fundraisers.

The Bridgehampton event, where Harris mingled with top donors and supporters of Hillary Clinton, was the ultimate signal that Harris is “thinking much bigger” than the Senate, one top bundler said.

“She’s running for president. Take it to the bank,” another fundraiser said. “She’s absolutely going to run.”Donors say Harris is giving them a glimmer of hope when they need it the most.

They see the former prosecutor-turned-California attorney general as embodying the qualities a Democratic presidential candidate would need to win the White House in 2020.

They also see the 52-year-old African-American woman as a fresh face.

She’s black and 52 years-old. Kamala Harris is downright youthful compared to most of the first stringers in the Democratic Party. She is seen as a rock star within the left’s ranks. Since November, she has raised upwards of $600,000 for Senate candidates in recent months and she recently raised $227,000 in an email for MoveOn.Org, according to sources close to Harris. Harris is big on the ‘Resistance’. She’s a radical and a dangerous one.

If it is between Harris and Elizabeth Warren, my money’s on the left going with Harris. Younger, more aggressive and she appeals more to the far left millennials. Ben LaBolt, a Democratic strategist and former spokesman for former President Barack Obama, says this about her: “She comes to Congress with immense credentials — a law enforcement official with a smart approach to taking on bad actors and protecting consumers. And she’s already broken through as bringing a unique voice in the Senate that is both substantive and relatable — which is hard to do your freshman year.”

She’s a pit bull, that’s for sure. She’s no Barack Obama by any means. But right now, she’s probably the best the left has. Let the games begin.