Justice Scalia: Gay Ruling Proves ‘This Court is a Threat to American Democracy

Justice Antonin Scalia did not mince words over what he felt about the U.S. Supreme Court’s flawed decision on gay marriage last week. He flat out declared that the John Roberts Court is a “threat to American democracy.” 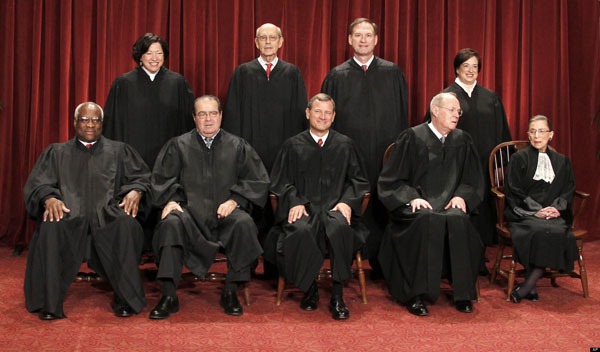 Scalia says that this continued practice of an “unelected committee of nine” deciding what rules will bind all Americans is robbing voters of their liberty.

He couldn’t be more right. Here is the key excerpt…

I write separately to call attention to this Court s threat to American democracy.

The substance of today s decree is not of immense personal importance to me. The law can recognize as marriage whatever sexual attachments and living arrangements it wishes, and can accord them favorable civil consequences, from tax treatment to rights of inheritance.

Those civil consequences and the public approval that conferring the name of marriage evidences can perhaps have adverse social effects, but no more adverse than the effects of many other controversial laws. So it is not of special importance to me what the law says about marriage. It is of overwhelming importance, however, who it is that rules me. Today s decree says that my Ruler, and the Ruler of 320 million Americans coast-to-coast, is a majority of the nine lawyers on the Supreme Court. The opinion in these cases is the furthest extension in fact and the furthest extension one can even imagine of the Court s claimed power to create liberties that the Constitution and its Amendments neglect to mention. This practice of constitutional revision by an unelected committee of nine, always accompanied (as it is today) by extravagant praise of liberty, robs the People of the most important liberty they asserted in the Declaration of Independence and won in the Revolution of 1776: the freedom to govern themselves.

You can read the full decision, including Scalia’s dissent, HERE[1].