At one of the last poll watcher training sessions held by the King Street Patriots on November 1, Assistant Harris County Attorney Doug Ray made an admission that contravenes the media meme that [1]charges KSPs poll watchers with harassing voters[2] here in Harris County, Texas.

All week the media and Democrats have charged that voters were being harassed by King Street Patriots poll watchers and thus far county officials have not countered the claims being made by KSPs opponents. But this evening the myth has been busted. 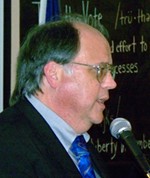 During an address to those attending a late training session, attorney Ray admitted that most of the reports the county has gotten about “hovering” over voters has been blamed on poll judges and workers, not the King Street Patriots poll watchers.

In his first address to the room, witnesses heard Ray say, “There were lots of reports about poll watchers intimidating or ‘hovering’ over voters. We learned that those were actually poll workers for the county.”

After he spoke to those gathered, I asked Attny. Ray about his comments.

This is a startling admission by the county attorney, one that wholly destroys the claims made against the King Street Patriots.