LA Times Feeds Into Obama’s Wedge Politics, Says 2012 Is Up To ‘Women and White People’ 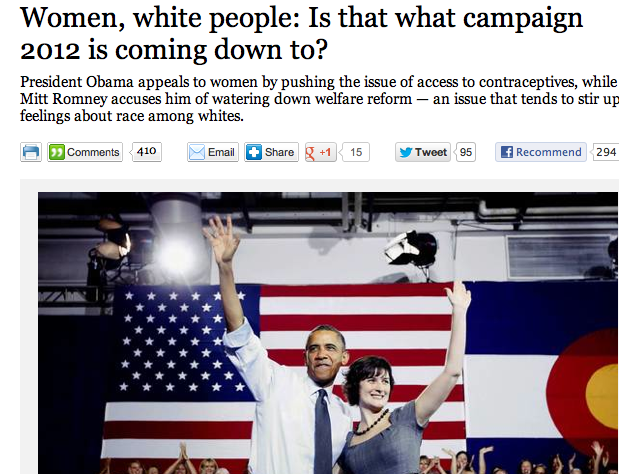 David Lauter’s column featured[2] in the: : LA Times today was a disgraceful pivot to whittle the 2012 election to say it’s really hinging on women and white people. : They’re the gatekeepers. We should forget about hispanics, high unemployment, healthcare, trillion dollar deficits, and anemic economic growth because they no longer the core issues of the election. : It’s wedge politics 101 being played out here.

It does play into Obama’s current modus operandi of lying to keep his job. : They prevaricated on officially condemning Sen. Harry Reid’s lies about Romney’s taxes. : They truly think Romney is responsible for giving Joe Soptic’s wife cancer in Priorities USA’s despicable new ad. : Now, it’s time to rehash the war one women and start drinking beer with the white folks.

Obama seems to be trying to “bork” Romney with his stop in Colorado to talk about contraception in what appears to be an attempt to widen the gender gap amongst unmarried women. : At one campaign rally, the president said, “when it comes to a woman’s right to make her own healthcare choices, they [Republicans] want to take us back to policies more suited to the 1950s than the 21st century.” : This statement, coupled with Obama pimping out Sandra Fluke, who introduced him in Denver, makes it a nice and divisive Kennedy reach around.

Polls show Obama has kept his lead in Colorado because of his support amongst women. : A point that was made in Lauter’s piece:

…in the states where he has been able to keep a lead, he has done so because support from white women offsets that deficit. For the president’s reelection team, a key goal is to expand the size of that female majority. Romney, meanwhile, needs to boost his support among white voters by reminding them of their anxieties about Obama’s presidency.

The white voters most opposed to Obama have consistently been men who do not have a college degree. Among those voters, Obama trailed by 32 percentage points in Colorado and 24 percentage points in Ohio.The problem is that CBS NEWS : posted a piece yesterday showing Romney ahead of Obama.

Yes, they did, but you omitted the part where it said: Romney was winning amongst white college graduates 49 percent to 46 percent and the fact that “the economy is the most important issue to likely voters in each of these battleground states, with health care a distant second.: In Colorado voters give Romney a clear edge on handling the economy, 51 percent to 41 percent.”

In addition, it appears Lautner never even bothered to read Public Policy Strategies’s Alex Bratty and her study on “Walmart Moms[3],” which details that women aren’t a monolithic voting demographic galvanized by ‘women’s issues.’ : It’s going to be about the economy and if that’s the case, then Mr. Romney sure has the better chance of winning over these hard-working women who, overall, favor a Republican congress.

This is the only avenue to re-election the president has left, which is driving a wedge issue to make people fear Republicans as the party that will dish out a dismal existence for women and the American middle class. : However, given that over 700,000 women have lost their jobs under the Obama economy[4],: I think that false narrative is ‘lie 23214’ on the Obama BS list.