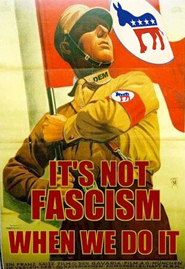 The city council of Seattle saw a pay-to-park lot owned by a private landowner and businesswoman and collectively thought to itself, “ya know, it would be nice to have the income from that parking lot for our own.” And so, in the typically lawless way that Democrats operate, the city council sent the woman a note telling her that they have decided that she must hand over the land to them so that they can make the money off the parking lot instead of her. The land owner, though, saw no reason to comply, and oddly enough and a court fight ensued.

Not long ago, the city of Seattle enviously eyed the land owned by Spokane resident Myrtle Woldson dreaming its greedy little dream that the income she derived from the pay-to-park business she had on that land was theirs.

So, they asked Mrs. Woldson if she would sell them the land. But the then 103-year-old businesswoman decided that she wasn’t at all interested in selling her lot.

Yet, like all lawless Democrats, the city fathers of Seattle weren’t interested in fairness and the rule of law, so in their infinite wisdom decided to condemn her property and evoke eminent domain. The city simply decided to steal her land from her, forcibly removing it from her ownership so that the city could bolster its tax wasting ways by folding the income from the pay-to-park business into its own pockets.

Woldson took the city to court, though, insisting in her silly American way that her property was rightfully hers and the city could not just waltz in and steal it from her. It is so quaint that she thinks this is America where we the people have rights. Silly woman.

Still, the fight goes on even though Mrs. Woldson passed away[1] this year at 104-years-old. Her estate is fighting on and good for them for doing so.

We are only inches from living in a state of nature, my fellow citizens. Take measures accordingly.