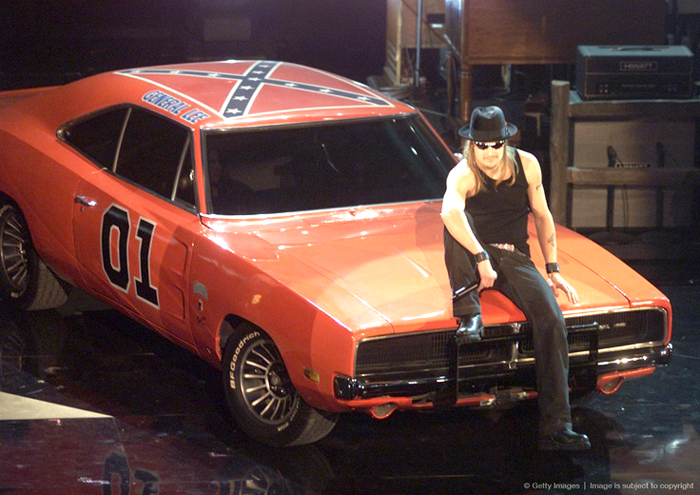 Kid Rock has been seen with a Confederate flag adorning his clothing or–as in the clip below–even on a motorcycle helmet. He has also displayed the banner on stage in the past. But now the Michigan-born performer is under fire[1] for doing so.

While it isn’t clear the last time Kid used one of the flags during a performance, members of a Detroit-based civil rights group are demanding the singer denounce the Army of Northern Virginia battle flag, and are asking the Detroit Historical Museum to remove his name from an exhibit he funded if he doesn’t.

According to the Detroit Free Press, a dozen or so members of the Michigan Chapter of the National Action Network held a protest Monday in front of the museum, where there are no Confederate flags, to target an exhibit that bears Kid Rock’s name.

Rev. Charles Williams II, the president of NAN’s Michigan Chapter and a pastor at a local church said, “the hometown hero who is a zero with the Confederate flag.”

The group’s political director Sam Riddle asked, “How in the hell can Kid Rock represent Detroit and wave that flag just generating millions and millions in ticket sales — a flag that represents genocide to most of Detroit?”

Knowing Kid Rock he is more likely to tell these people to pound sand. But he has yet to respond. So we’ll see.