Already rushing to the microphones to try and use the murders in a South Carolina church to undermine the U.S. Constitution and push his loser gun control ideas, Barack Obama lied today saying that the US is the only country with mass murders. 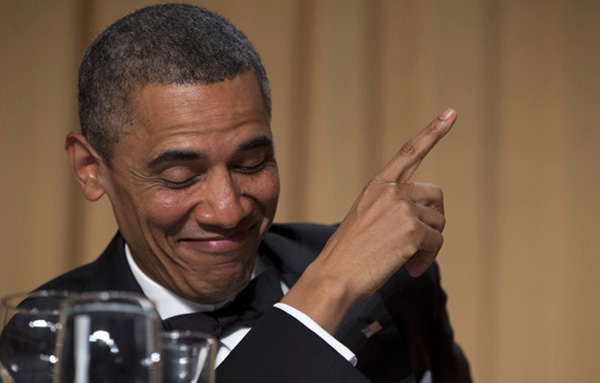 During his press conference today Obama said, “This kind of mass violence does not happen in other advanced countries.”

But this simply isn’t true. We have but to look to France only a few months ago when Islamists murdered 12 members of the staff of Charlie Hebdo magazine.

But there have been many, many other[1] examples of mass likkings abroad.

July 22, 2011: Confessed mass killer Anders Behring Breivik kills 77 in Norway in twin attacks: a bombing in downtown Oslo and a shooting massacre at a youth camp outside the capital. The self-styled anti-Muslim militant admitted both attacks.

April 30, 2009: Farda Gadyrov, 29, enters the prestigious Azerbaijan State Oil Academy in the capital, Baku, armed with an automatic pistol and clips. He kills 12 people before killing himself as police close in.

Sept. 23, 2008: Matti Saari, 22, walks into a vocational college in Kauhajoki, Finland, and opens fire, killing 10 people and burning their bodies with firebombs before shooting himself fatally in the head.

April 26, 2002: Robert Steinhaeuser, 19, who had been expelled from school in Erfurt, Germany, kills 13 teachers, two former classmates and policeman, before committing suicide.

April 28, 1996: Martin Bryant, 29, bursts into cafeteria in seaside resort of Port Arthur in Tasmania, Australia, shooting 20 people to death. Driving away, he kills 15 others. He was captured and imprisoned.

March 13, 1996: Thomas Hamilton, 43, kills 16 kindergarten children and their teacher in elementary school in Dunblane, Scotland, and then kills himself.

Dec. 6, 1989: Marc Lepine, 25, bursts into Montreal’s Ecole Polytechnique college, shooting at women he encounters, killing nine and then himself.

And that is only a partial list. It doesn’t include mass stabbings, some school murders, and even the Charlie Hebdo murders aren’t there.

So, once again, Obama lies to the American people.