Full disclosure here…[1] I adore Tim Allen. Always have and yes, I know about his time in jail for drugs. People in glass houses and all that. His show Last Man Standing is simply the best out there these days and it’s only half an hour. It’s a riot. Allen is known for his jabs at Barack Obama and Hillary Clinton on the show. He would go much further if it wasn’t for those pesky producers and writers. What he just said to Megyn Kelly about the Hildabeast is going to land him right in the middle of a crapstorm and I bet he loves it. His women writers kept saying it’s time for a woman in office… to which Allen replied, oh… then you’re good with Sarah Palin? He said they looked like they ate bad fish. Epic and very, very funny. 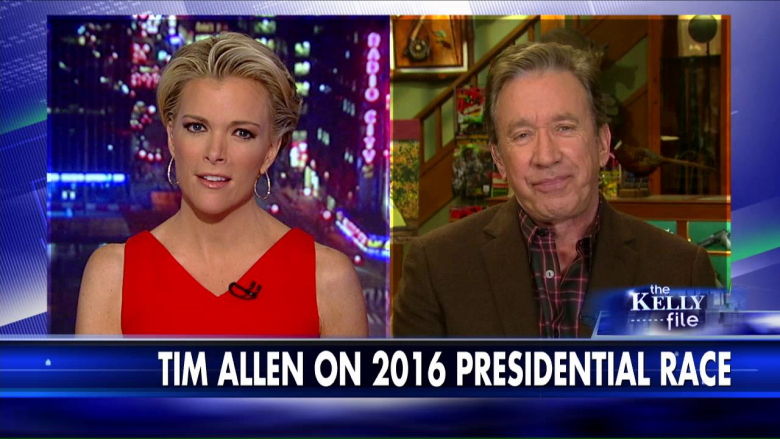 Okay so the cat’s been out of the bag for a while now. Tim Allen is a right-leaning, moderate Conservative (Read “Tim Allen’s Hilarious Clinton Jab here[3]” and “Tim Allen Sounds off on Second Amendment” here[4]). His show “Last Man Standing” is the only one on network television that regularly takes shots at both President Obama, and Hillary Clinton. Nothing more than a stiff jab here and there, but still noteworthy. But this latest interview… well, let’s just hope he has an crap-umbrella ready. Because he’s walking into a crap-storm.

“The women writers on our staff said, ‘it’s about time [for a woman to be President]!’ So one of us said, ‘If it was Sarah Palin, would it still be about time?’ And boy, it looked like they all ate bad fish.”

Oh boy. He’s even shocked by her campaign…

“Did she actually BARK like a dog? Did I actually see that? She doesn’t have a skill set for jokes.”

Oh jeez. Expect angry SJW feminists to be demanding Tim Allen’s head on a plate soon. They. Are. Going. To. Lose. Their. Minds.

I will swallow hard and forgive Allen for being a Kasich supporter. He knows not what he does. When he asked if Hillary actually barked like a dog during a speech the other day, I just laughed. Yes, she did and he’s right… humor is not part of her skill set. Woof! But she does give meaning to the term ‘Barking Moonbat’. Allen is right, these feminists are stark raving loony. They only like certain women… those that are Marxist. I hope that Tim Allen keeps up the jabs and the humor. It’s a much needed release for conservatives and it is the absolute truth. Kasich, really?