Bob Shrum, a longtime Democrat operative, has decided that President Obama’s handling of the White House during this IRS scandal is bad. Maybe not “Nixonian” bad, but is instead a sort of Carteresque incompetence because of the way the President has handled these recent crises. 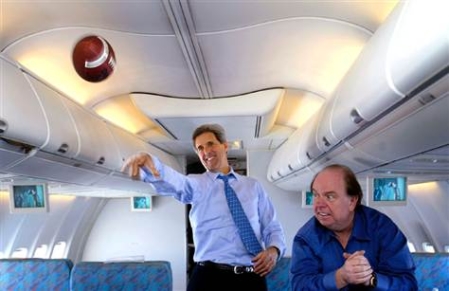 Shrum is a high powered, Democrat operative of the first order. He was a speech writer for such Democrat luminaries as George McGovern and Jimmy Carter, and worked on campaigns for Dick Gephardt, Bill Clinton, Al Gore, Bob Kerry, and John Kerry and more, so when he speaks a lot of folks in the media pay attention.

For The Daily Beast[2], Shrum starts his piece denying that Obama did anything wrong with the IRS targeting of conservatives. He insists that Obama didn’t direct these attacks on his enemies and claims he had no idea it was going on. Shrum is going with blaming the “low level operatives in Cincinnati” explanation.

“For the White House, there is no crime here, there is no scandal, no matter how feverishly, irresponsibly, or demagogically the GOP labors to concoct one,” Shrum insists.

But once he gets past that disclaimer, he warms to his Obama-as-incompetent theme.

“This is not a case of Nixonian indifference to the Constitution, the law, and the president’s oath of office,” Shrum decides. “But it does look like a reprise of Cartersque incompetence, increasingly so as we learn more about how the White House staff handled–or mishandled–a crisis they knew was coming.”

Shrum points out that the whole cascade of lies from Obama’s underlings about who knew of the IRS scandal and when they knew it was a Keystone Kops version of crisis management.

First White House Counsel Kathryn Ruemmler claimed she knew but didn’t tell the president in order to “shield him” from the scandal. But then we found out that Ruemmler had actually briefed Chief of Staff Dennis McDonough and other aides before that timeline. Worse, we found out still later that officials in the Counsel’s office had known even sooner than Ruemmler. Next we found out that Obama’s staffers and the Treasury Dept. had conferred even earlier than that on how to handle the soon-to-break story. A lot was known about the coming scandal for far longer than Obama’s White House at first claimed.

So, as each day passed we got a new story on who knew about the actions of the IRS and when they knew it. This drove Shrum to say, “it’s hard to credibly contend that the White House strategy here, if you can even label it that, has been a model of crisis management.”

Shrum goes on to detail how the President should have handled the IRS scandal, all of which is based firmly on the unproven claim that Obama didn’t know anything about the actions of the IRS until “he learned it in the news” like the rest of us did. But Shrum ends firmly scolding the incompetence of this administration.

On the IRS, the course probably will be longer than it had to be. For the White House, the problem here resembles Carter, not Nixon. It isn’t about crime; it’s about competence. This president didn’t do anything wrong. But the West Wing sure didn’t do everything right.

Shrum’s bland assurances that nothing illegal occurred at the IRS aside, he is certainly right that this president and his entire administration wallows in incompetence.