Obama’s old Attorney General, Loretta Lynch, just made a one minute video that talks about people marching, blood and death in the streets. This video was listed as something that was supposed to inspire people to fight. It sounds like she’s initiating a bloody civil war between the right and the left. Is this what the Democrat Party has become?

The left has become the party who fights everything that doesn’t go their way. They’ve lost their ability to compromise or accept defeat. When Obama was elected, TWICE, no one really cared or fought about it. People complained, but they didn’t turn into violent maniacs roving the streets looking for “Obama supporters” to beat up.

If Loretta Lynch is suggesting that people march and physically fight, then she’s lost her mind. She should have stayed on the airplane with Bill Clinton and taken a one way trip to somewhere nice. Use that big paycheck to go on a permanent vacation and stop suggesting that people march themselves into a bloody mess. This is an irresponsible Democrat[1] sounding crazy. 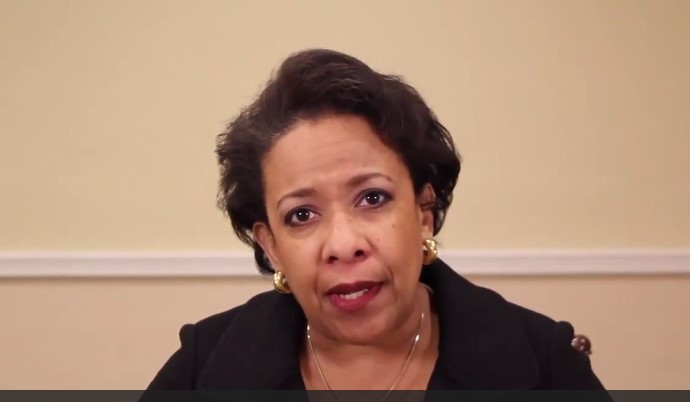 WASHINGTON – The Obama administration’s former Attorney General Loretta Lynch has made an impassioned video plea for more marching, blood and death on the streets – a video that was later posted on the Facebook page of Senate Democrats as “words of inspiration.”

The video is less than a minute long and begins by stating that people are experiencing “great fear and uncertainty,” with the unstated implication it is due to Donald Trump’s takeover of the White House.

Without offering any specifics, Lynch goes on to say that “our rights” are “being assailed, being trampled on and even being rolled back.”

But the strongest words come in a statement that seems to suggest the answer is street action that will inevitably turn bloody and deadly.

“I know that this is a time of great fear and uncertainty for so many people,” Lynch says. “I know it’s a time of concern for people, who see our rights being assailed, being trampled on and even being rolled back. I know that this is difficult, but I remind you that this has never been easy. We have always had to work to move this country forward to achieve the great ideals of our Founding Fathers.”

No Loretta Lynch, people will not physically fight to overturn a President because YOU simply don’t like him and YOU’RE not the Attorney General anymore.

This behavior is so childish and it’s extremely sad to watch the entire Democrat Party turn into this. It won’t be any fun winning every election as a Republican when there’s no Democrats left to fight with.

The problem with Loretta’s suggestion of, what I believe sounds like a civil war, is that it is completely pointless and people shouldn’t be locked up or murdered because of who the President is.

As of now, what has Trump done that was so bad?

In your personal life, what has actually changed?

Nothing has changed for me.

My daily routine and everything else is still kinda the same. It was like that when Obama was elected too.

The President is the face of the country and even though this one is a bit orange (thanks, spray tan), we’re still America and the best country in the world.

Instead of fighting about everything, just go out and live life!

Let’s put a smile on that Democrat face of yours.