There always has to be one goofball out there hatin’ on our national holidays, doesn’t there? This time it is hate for Valentines Day and on the flimsiest, most ridiculous reasoning: it is an “environmental travesty.”

For the left-wing New Republic, columnist Jeffrey Ball was first out of the chute to slam Valentines Day with a Valentines Day eve piece[1] uproariously entitled, “Valentine’s Day Is an Environmental Travesty The carbon costs of greeting cards.”

That’s right, if you buy a greeting card you are a destroyer of the planet. Talk about ridiculous hyperbole. In fact, with that logic, one can do nothing but live in a cave eating bugs and leaves in order to satisfy this green nazi.

The magazine also took to Twitter to scold anyone who falls for this evil, Earth destroying holiday saying, “If your other half bought you a Valentine’s card, be sure to say thanks for the 18.5 grams of CO2 it created.” 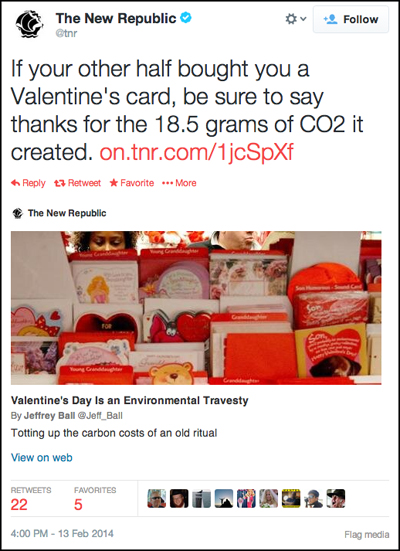 As tedious as his argument is, it is typical of the sort of Luddite nonsense we hear from the extremist greenies.

As Ball explains it, “it’s nuts to buy a piece of card stock, place it into a paper envelope, and give it to someone who (I love you, honey) will smile at it, stuff it in a sock drawer, and, almost certainly, never glance at it again. It’s even crazier to buy said piece of card stock, drive it to the post office, and have the U.S. mail truck it to an airport and then fly it to its destination.”

Why is this all so “nuts”? Because: greenisim, of course. Why those evil, evil cards have a giant “carbon footprint,” Ball says, and anyone who buys a greeting card–not just on Valentines Day–is guilty of destroying Mother Earf.

The fact that there is a greeting card industry at all tells Ball that “people are being less than honest when they tell pollsters they’re interested in making environmental tweaks in their lives, even tweaks that are easy and cheap.”

It’s all nonsense, of course. Greenies always seem to forget that trees are plants and can be regrown over and over again.

But this is all part and parcel to the hate for our culture that all leftists wallow in on a daily basis. After all, who could be against a day when people express their love for each other? Only a hate-filled green leftist, apparently, one who simply cannot stand it when others are happy even for the few minutes it takes to read a Valentines Day card.

In any case, one wonders if Ball was even being serious with his blather. Or, rather, was he looking for some way to be “different” and get eyeballs to his absurdity? Well, if the latter wasn’t his goal, he certainly succeeded in give us an absurdity.