Maxine Waters Is DONE After Attacking Trump for Creating Jobs

Twitchy is right…[1] Mad Max is so woke, she fell asleep. Heh. Now, she’s attacking President Trump for… wait for it… creating jobs. You can’t make this insanity up. I guess Maxine Waters would rather everyone be on the welfare dole, destitute and compliant while she sits in her $5 million mansion (but not in her district of south central Los Angeles – that’s for common people). Also, what she’s pushing about Trump only hiring foreigners for less money is a provable lie. What a hypocrite.

Gee, south central Los Angeles is such a paradise these days… not. It’s crawling with illegal aliens and gangs. Meanwhile, they keep Californians from owning guns so they can’t defend themselves. They are raising the minimum wage through the roof as all good Marxists do and therefore there are even fewer jobs there. If you get one, you certainly can’t afford to live there if you are just starting out. That’s a real struggle… almost no jobs and all that are left are unskilled, tons of crime, no guns and massive taxation. Maxine Waters has done her voters proud and they just keep on electing this corrupt moonbat. She’s been elected 14 times. SMH. 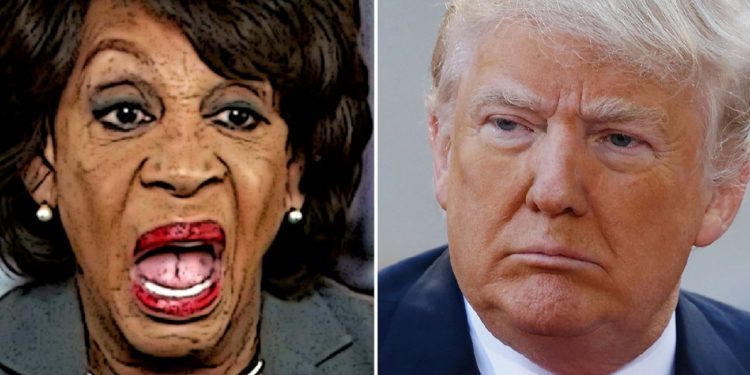 Maxine just can’t stop herself from steppin’ in it, over and over again.

If anyone in the Rust Belt needs a job, Trump is hiring -but only if you're a foreign worker willing to work at a Trump resort for less $$$

Maybe it’s time for Crazy ol’ Aunt Maxine to start focusing on her own Hellhole, California, and leave the witty banter to someone who actually has a sense of humor.

Then again, this is the Democrats we’re talking about, this could well be as witty as they get.

She had to know this wouldn’t go well for her.

At least he hires people instead of turning them into wards of the state.

She would rather make people wards of the state than watch them try and make something out of themselves.

The Democrats actually have no sense of humor. Communists never do. Wherever they are in office, Democrats destroy cities and increase poverty. Trump has done the opposite. He’s bringing jobs back to the US again and in many places you can find work once more. Not in hellholes like LA where Dems such as Waters hold sway and preach about the oppression and subjugation of the masses while actively doing just that. You have to wonder if the collective IQ of those that follow Waters is somewhere around 15.

Mad Max doesn’t know what it means to create jobs. She’s never done it, so she should just shut her pie hole. She’s embarrassing herself. Waters would rather see people on unemployment, welfare and subsisting on food stamps in gang infested, violent drug dealing neighborhoods. That’s why she doesn’t live in her own district. Duh. And since a big part of her constituency is foreign now, I’d be careful about trying to knock Trump for getting foreigners jobs. Just sayin’. Lesson for today, Maxine Waters is full of Marxist crap.

Maxine is so full of it.