Maxine Waters Gets ‘Triggered’ And Goes Nuts By Shrieking 3 Words Over and Over! [VIDEO]

Maxine Waters[1] is off her meds… again. This woman is a stone cold b*tch. She really is. She’s not just a moonbat, she’s hatefully unhinged. Last week, she interrupted Steve Mnuchin dozens of times[2] while he was testifying in front of the House Financial Services Committee. I have no idea why she was allowed to keep doing it. She outright bullied Mnuchin over revealing President Trump’s finances.

Mad Max just kept it up until Committee Chairman Jeb Hensarling had to constantly intervene. Over and over and over again she kept shrieking, “Reclaiming my time!” She used it as a weapon to bludgeon and interrupt Mnuchin. It was incredibly rude and she didn’t follow the chairman’s guidelines whatsoever. Evidently, not only does she hate the rule of law, Waters feels that rules don’t apply to her. She continually demanded an answer as to why she had not received a response to a letter concerning Trump’s financial connections to Russia. Mnuchin tried to tell her he had been in ongoing discussions with the House committee, but that certainly didn’t satisfy this cloven hooved harpy. 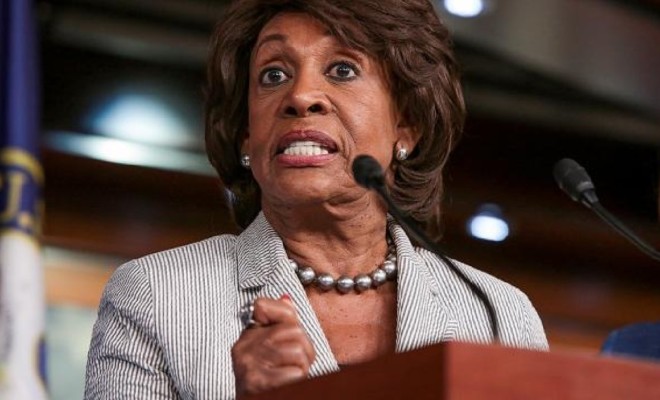 From the Conservative Tribune[4]:

California congresswoman Maxine Waters freaked out during a House Committee hearing this week, and chanted three words over and over when she heard something she didn’t like, forcing the rest of us to hear something we don’t necessarily like.

Waters must have interrupted Mnuchin a dozen times in a span of two minutes, making it impossible for him to completely answer the question.

When Mnuchin asked the committee chairman for clarification of committee rules, Waters interrupted him again.

“Reclaiming my time,” she said. “What he failed to tell you was, when you are on my time, I can reclaim it.”

Basically, Waters made next to no sense during all of this. Give Mnuchin credit though, he stood up to the sea hag. As she kept reiterating that she was taking her time back, Hensarling interjected with “We will give the gentlelady adequate time.” That’s no ‘gentlelady’ sir… that’s Maxine Waters. “So the time belongs to the gentlelady from California, but I assure you, majority members will allow you to answer the question when it is our time,” Hensarling told Mnuchin.

“We have been responsive and we are trying to coordinate with you the response, and we’ve suggested that you get the information through the other committees, but I would like to emphasize we believe we have been very responsive and will continue to do so,” Mnuchin said before Waters interrupted him yet again. “Reclaiming my time,” she interrupted again. “Thank you very much. You left a message.” Time for a good old-fashioned gag. “No, we didn’t leave a message, we spoke to the chief oversight counsel—” Mnuchin began again before Waters interrupted to repeat “reclaiming my time” several more times. She contradicted his claim and then called on them to move on. She’s nuts.

You can’t blame Mnuchin[5] for being incensed. Who wouldn’t be? This is the same beast who keeps calling for the impeachment of President Trump. She even nonsensically demanded an apology from Mnuchin. The chairman should have had her expelled. I bet there would have been a standing ovation.