I may not always agree[1] with Tucker Carlson, but he’s incredibly sharp and he will shred you if you get in his face. I think Maxine Waters just found that out the hard way. Evidently Carlson laughed off Maxine Waters running for office in 2020. You can understand that. First off, she’s 78 years-old right now – she’ll be 81 in the next election cycle. Plus, she’s a raving unhinged moonbat who continuously calls for the impeachment of President Trump. I can understand how he would consider it a joke.

Waters took offense to Carlson laughing at her over it. On MSNBC she denied she ever said she was running for the presidency and called Tucker a liar. “They made up this story,” Waters said. “They are trying every way they can to discredit me, to make people uncomfortable with me…so you’re gonna be hearing a lot more from these people, who are all, you know, aligned with trying to discredit Maxine Waters. Don’t believe anything they’re saying.” She absolutely lied there… she had just told The Daily Caller[2] that she would run if millennials wanted her to. 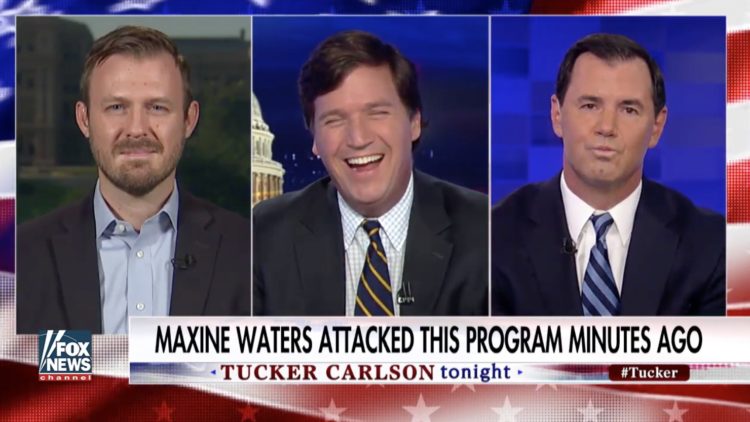 Fox News host Tucker Carlson responded in real time to Rep. Maxine Waters (D-Calif.) on his show Friday night to comments the liberal Democrat had made about him on MSNBC just minutes prior.

Waters, speaking to MSNBC host Joy Reid, was responding to a recent discussion Carlson had on his show when he discussed with Larry Elder a report that said Waters was considering running for the White House in 2020.

Ahead of a speech in New Hampshire this weekend — ironically, also the state with the first presidential primary — Waters told the Daily Caller[4] that she would run for the White House if millennials “want” her to.

“I’m just going up to do a county Democratic thing. That’s all,” Waters told the Daily Caller. “I’m not running for anything but my own seat. I don’t have any presidential aspirations. If the millennials want me to do it, I’d do it, though.”

After that lie, Carlson proceeded to eviscerate Mad Max. Approximately four minutes after Waters spouted her fib on MSNBC, Tucker interrupted his show to respond live on-air. And he let her have it. First, he cracked up laughing. Then it began: “I just, I just had to play it, I couldn’t help myself,” Carlson said laughing uncontrollably, “because of course, Maxine Waters is self-discrediting.” “Why does Maxine Waters get to go on cable channels and no one ever mentions her ethical problems, the fact that she lives in a $4.5 million house after working for the government for 40 years, et cetera,” Carlson contended. He’s got her dead to rights.

Maxine Waters is a life-long racist corruptocrat. She has gotten wealthy off the backs of her constituents. You can’t believe a damn thing that comes out of her pie hole. She doesn’t even live in the district where she is voted for. No, she lives in a mansion, far removed from the riff-raff of her district and yet millennials look to her as some kind of savior of the oppressed. What a freaking joke. No one ever looks into a crooked politician like Maxine Waters… but they hyperventilate over President Trump. That’s because if you are a lying criminal on the Democratic side you get a pass. Look at every one of them. Mad Max is near the top of that list.