Mad Max is now 78[1] and she has been broadly hinting at running for the presidency in 2020 at the spry age of 81. Not going to happen. Too old and too bitter with hatred… even for a Marxist. She is adored by the millennials though, which is baffling. It must be desperation. It certainly isn’t charisma or some kind of youthful appeal. She told The Daily Caller this week that her New Hampshire schmoozing had absolutely nothing to do with a planned run for the presidency. Cough… cough… bull crap.

Maxine said she would only run for the presidency if Millennials want her to. “I’m just going up to do a county Democratic thing. That’s all,” she said. Right and if you believe that, I have some prime coastal property in Nevada you will just adore. She claims to have no real presidential aspirations… she just does what she does because she hates President Trump. The first part is a lie, the second part is very, very true. This corrupt moonbat is in her 14th term and she represents a huge part of south central Los Angeles. She doesn’t even live there. But she does live in an exclusive neighborhood in a $5 million mansion away from the riff raff. She’s a hypocrite and a corruptocrat. 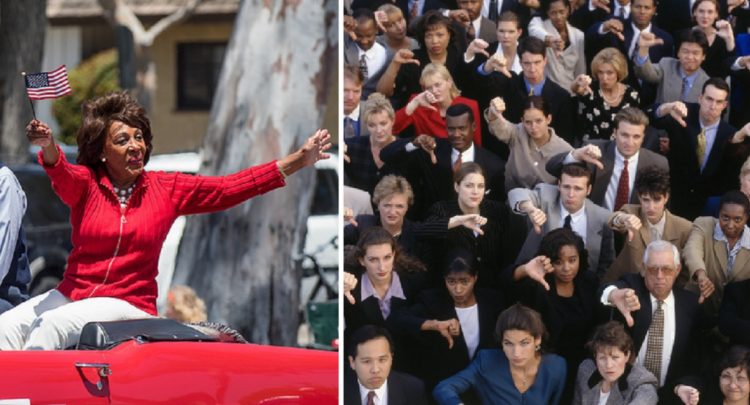 WASHINGTON — California Democratic Rep. Maxine Waters, a favorite among liberal progressives, told The Daily Caller Thursday that this weekend’s scheduled appearance[3] in New Hampshire has nothing to do with potentially running for president in 2020.

But she said that she would run for president if millennials want her to.

“I’m just going up to do a county Democratic thing. That’s all,” she said.

When TheDC pressed further, Waters, an outspoken critic of President Donald Trump, said laughing, “I’m not running for anything but my own seat. I don’t have any presidential aspirations. If the millennials want me to do it, I’d do it, though.”

The California Democrat, who is in her 14th term representing a large swath of south central Los Angeles, has previously called for Trump’s impeachment.

An invitation, snagged by New Hampshire’s WMUR, shows that Waters is set to be in the state today for a picnic scheduled to be at the Miller Farm in New Durham, where she will be around members of the Strafford County Democratic Committee. And no doubt fundraising and making political plans. Donors will be swarming and the desperation to stop Trump will be thick in the air. Maxine Waters is a died-in-the-wool commie and she will be among her fellow comrades today making battle plans. If this is the best the left has to offer, Trump has absolutely nothing to worry about in 2020.