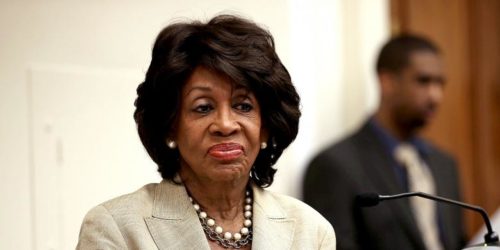 With her usual smug and somewhat deranged[2] demeanor, Representative Maxine Waters (D-CA,) warned President Trump at a town hall meeting in Inglewood, CA on Saturday morning that she is “coming for” him.

Of course, President Trump is probably shaking in his boots at the thought of Wacky Waters coming after him. She’s been calling for his impeachment for months. Apparently in her world, beating the Democrat candidate for President is an impeachable offense.

Waters has a long history of weirdness when it comes to her public statements. This is only one more to add to the list. She thinks it’s her job to hunt down the President. One wonders what she plans to do when she gets him?

She continued her rant with, “In this business you expect there are people who disagree with you or even hate you. I put everything on the line, I’m going for it [because] I cannot suffer him, I’m so offended by him and the way he’s conducted himself, the way he disrespects people and to add insult to injury he doesn’t respect the government, he doesn’t know anything about it.”

Really Maxine? Disrespect and insults? You mean like this racist comment you made in 1993; “Policy, for the most part, has been made by white people in America, not by people of color. And they have tended to take care of those things that they think are important. Whether it’s their agricultural subsidies, or other kinds of expenditures that are certainly not expenditures for poor people or for people of color. And so we have to band together and keep fighting back.”