Maxine Waters Taunts Trump: He Should be Dragged to ‘Impeachment’ Over GOP Healthcare Bill 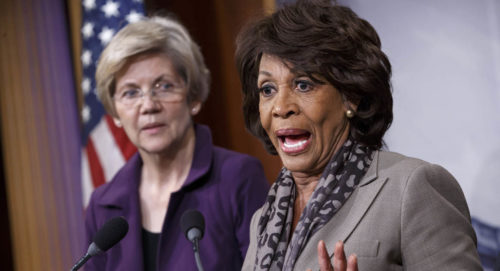 Well, once again, Representative Maxine[2] Waters, (D-CA), is never out of the news for long. Her months long attack on President Trump got some new vigor when she tweeted, in response to the GOP healthcare bill, on June 23rd, that Trump ought to be “dragged” to impeachment. That’s a really unfortunate choice of words. “Dragged?” That word is a little too close to some atrocities of the past, isn’t it? Is that really the right word to use here, Maxine?

Instead of disabled people in wheelchairs, the only person who should be dragged anywhere is Trump – down the hall, to impeachment.

Waters has said in the past, “He is not my president. He is not your president. He lies. He cheats. He’s a bully. He disrespects us all. If he thinks he can mess with the LGBT community, he better look at what happened right here in West Hollywood. You deny, you disrespect, and you will find that there are people who have the courage to organize and to take back whatever needs to be taken back. We resist this president because he stands for the worst of everything. And guess what, I know that people may not quite be ready. I know some are a little hesitant. I know some are saying I’m not so sure, Maxine, that what you are saying is the right thing, but I’m saying, impeach 45. Impeach 45.”

What Waters fails to grasp here is that there is no evidence of any impeachable offense when it comes to President Trump. Oh, and also, Ms. Waters? He is actually your President. You don’t have to like it, but you can’t change it. This impeachment nonsense is the last refuge of those on the Left who have no argument but ‘boohoo, we are mad that Hillary lost.’ Waters seems to think that simply winning the Presidential election against her wishes, IS an impeachable offense. If anyone needs to go it is Representative Waters, who has been polluting the media with her vile and uninformed rhetoric for far too many years. Hey California, can you please vote her out? She’s not actually helping matters any.