This reminds me of the Salem Witch Trials.[1] It’s political correctness hysteria and group think run amok. You see crying, hyperventilating politicians on both sides of the aisle rushing to pull down Confederate flags, statues and dig up bodies, for God’s sake. They want to eradicate the Confederacy from our history now – how very Stalinesque of them. Now, there are calls to ‘adjust’ the Constitution and rewrite it… claiming the US Constitution is a symbol of the old Confederacy that needs to be reorganized and censored. This has gone way too far.[2] They are labeling our founding documents as outdated and obsolete. Whither America? As long as you are on a witch hunt for racists, you’ll have to purge most of the Democratic Party as well. Evidently, American history, free speech and thought are now crimes against the State and they want them dealt with permanently. 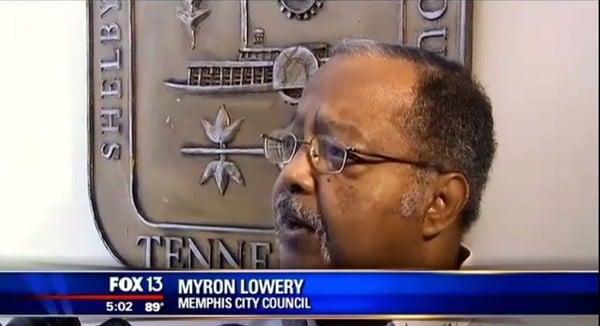 Myron Lowery, the Memphic city councilman leading the charge to dig up Confederate General Nathan Bedford Forrest and his wife.

Late Tuesday, the Memphis, Tennessee, City Council voted unanimously to dig up the remains of Confederate General Nathan Bedford Forrest and his wife[4], Talking Points Memo[5] reported Wednesday. The council also voted to remove a statue placed in Forrest’s honor. The move came after Mayor A.C. Wharton called for the bodies to be dug up[6] and relocated.

Tuesday’s vote is not the end of the story, however. According to WREG[7], the Chancery Court would also have to approve the removal of the remains and Forrest’s family would also be involved in the decision.

Forrest and his wife are currently buried beneath a statute honoring the general in a park which had been named after him until two years ago. The park is now known as Memphis’ Health Sciences Park.

Officials with Elmwood Cemetery — the location of Forrest’s original resting place — said they would be willing to help move the remains but said they did not want to become the new home of the statue. It is not known where the statue would go if the Tennessee Historic Commission approves its removal. The commission is not set to meet before October.

“It is no longer politically correct to glorify someone who was a slave trader, someone who was a racist, on public property,” said City Council member Myron Lowery. WREG said Lowery spearheaded the effort to remove Forrest, his wife and the statue. The move to relocate Forrest is part of what many now see as a Stalinist effort to purge U.S. history after the tragic shooting in a Charleston, South Carolina church that left nine dead.

Not everyone is celebrating the vote, however. Lee Millar, a spokesperson for the Sons of the Confederate Veterans, said the shooting proves the need for the statue to remain.

“I think it’s disgusting that people use the shooting in Charleston and use those victims to forward their own agenda and join this anti-Confederate hysteria that’s going on,” he said. “To attack something like that now I feel is just really misguided,” he added, calling the response in Memphis and other places a knee-jerk reaction.

Katherine Blalock, an area resident whose great grandfather served with Forrest in the Confederate Army, agreed. “We need to have a coming together of people, not a divide and conquer,” she said.

But it seems that dividing the country is exactly what some want. Not content with removing the Confederate battle flag from the national memory, some now want to see the Jefferson Memorial taken down[8]. Retail stores have yanked the battle flag and the House has voted to forbid sales of the battle flag at National Parks. As we reported Wednesday, one former academic called the U.S. Constitution a Confederate symbol and said it should be edited[9].

It’s difficult to say where the madness will end. One thing is certain, though. Real racism — not the phony kind liberals see in a peanut butter and jelly sandwich[10] — will still exist even if Forrest is dug up and his statue removed.

These people have absolutely no respect for the dead or our history as a nation. This is monstrous and that everyone is just brushing it off is highly disturbing. First they came for the dead Confederates. Let them rest in peace for cripes sake. Now we are empowering massive censorship everywhere you look. Racial crimes and riots are in the streets and you’ve got aggrandizing politicians decrying the evil of the Confederate flag and the South. They are going after Christians and Constitutional conservatives as well. Just where does this end? Gulags, death and enslavement. With revolution for dessert.