You just have to love Michelle Malkin.[1] I’ve known her for years and there is no one out there that fights harder or tells it like it is quite like Michelle. And she’s done it again. She has started a new committee: “Conservatives for Maxine Waters for President.” Before you retch, hear me out… she may be on to something here. You see, Malkin wants Mad Max to run because all it can do is ensure that conservatives stay in power. It would be a blessing to have her run because there’s no way she could ever win. It would be yet another loss for the Marxists. I’m warming to the idea as I write this.

One day Maxine is running and the next, she’s denying it. But I’m pretty sure she’s running… I mean the millennials are demanding it, right? She’s a spry 78 and will be a young 81 come election time. She was in New Hampshire this last weekend and banned reporters from the Democrats picnic. The Dems and Mad Max were busy planning how to overthrow Trump and she didn’t want spies there. I chose my words carefully there because she is calling for a coup. If she can’t get that, she’s demanding impeachment. Yep, crazy Auntie Maxine would be the perfect candidate for the Dems and for us. 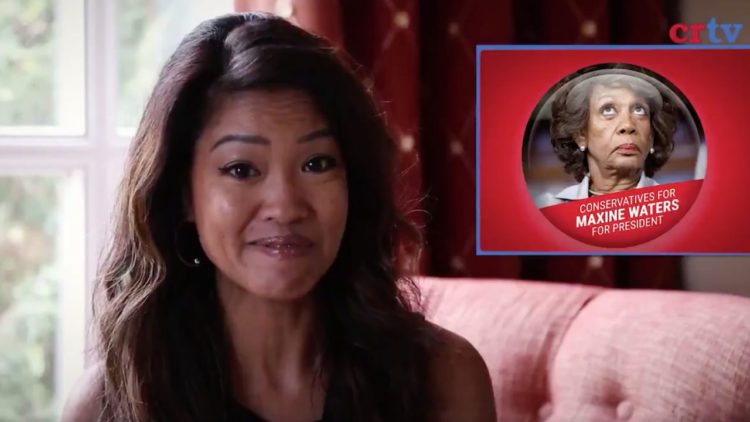 Conservative commentator Michelle Malkin announced Friday that she is heading up a new committee: “Conservatives for Maxine Waters for President.” But not for the reason you may think.

In an ad for Conservative Review TV, Malkin said she wants to make Rep. Maxine Waters (D-Calif.), who she jokingly labeled a “beltway barnacle,” the “defining face of the Democratic Party.” Of course, it’s not because Malkin, a staunch conservative and supporter of liberty and limited government, supports Waters or has suddenly changed her values, but because Waters embodies the current Democratic Party — a system marked by repeated electoral losses.

“I would like to make an official announcement: Today, I am assuming the role of chairman of a new political committee, ‘Conservatives for Maxine Waters for President,’” Malkin said.

Malkin explained that she is assuming the role after reports indicated that Waters may have political aspirations beyond her congressional district for 2020.

Malkin points out exactly what I have as well… to find out exactly what kind of leader Waters is, Americans need to look no further than Waters’ “economically ravaged south-central Los Angeles district.” While her constituents live in utter squalor, Waters lives in a $4.5 million dollar mansion that oddly is not located in her voting district. She’s also one of the wealthiest members of Congress. “Staggering levels of persistent unemployment, poverty and gang violence 25 years after the LA riots,” are the fruits of Waters’ leadership, Malkin said. So very, very astute and true.

“As chairman of Conservative for Maxine Waters for president, I pledge to do my best to spotlight Mad Max’s long record of coddling gang members and using her office to enrich herself and her family,” Malkin said. Oooh! Can I play? Sounds like fun. Waters is also heavy into nepotism. Her daughter runs services for her campaign – she’s made hundreds of thousands of dollars that way and now the feds are looking into her business dealings. Waters at one time also secured an ambassadorship for her husband to the Caribbean country of the Bahamas. Nice, huh?

Not only is Mad Max one of the wealthiest in Congress, she’s one of the most corrupt. Citizens for Responsibly and Ethics in Washington, a government watchdog group, has named Waters the most corrupt member of Congress on four separate occasions: 2005, 2006, 2009 and 2011. She was also charged with a number of ethics violations in 2010 when she used her clout to get a $12M bailout for a bank her husband owns stock in. He also used to sit on the board for that bank.

“There you have it in a nutshell, liberalism in living color,” Malkin said. “Corruption, cronyism and cashing in for friends and family while your constituents and taxpayers get screwed. Three cheers for making Maxine the defining face of the Democratic Party,” she added. I’m in – it’s a fantastic idea. Heh.

Watch: @MichelleMalkin[3] is proud to announce:
Conservatives for @MaxineWaters[4] for President