Michelle Obama Has Fit Over Heckler

Granted, there’s a time and place for everything, and heckling someone giving a speech can be rude, but, it is protected by 3 parts of the 1st Amendment (free speech, redress of grievance, and protest peaceably). 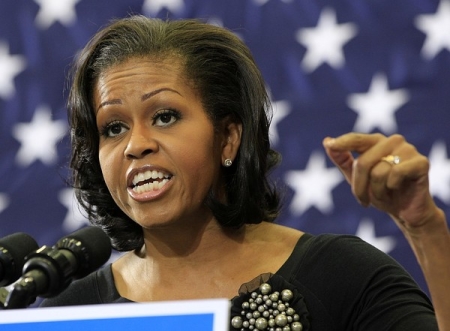 (Washington Post[2]) First lady Michelle Obama experienced a rare face-to-face encounter with a protester late Tuesday — approaching the activist and threatening to leave a fundraiser if the person did not stop interrupting her speech.

Obama was addressing a Democratic Party fundraiser in a private Kalorama home in Northwest Washington when Ellen Sturtz, 56, a lesbian activist, interrupted her remarks to demand that President Obama sign an anti-discrimination executive order.

Obama showed her displeasure — pausing to confront Sturtz eye to eye, according to witnesses.

“One of the things that I don’t do well is this,” she said to applause from most of the guests, according to a White House transcript. “Do you understand?”

A pool report from a reporter in the room said Obama “left the lectern and moved over to the protester.” The pool report quoted Obama as saying: “Listen to me or you can take the mic, but I’m leaving. You all decide. You have one choice.”

They forgot to include that part[3] in the official White House transcript.

What you have is two rude people going head to head. One, because they want (NMP) Obama to Do Something regarding anti-discrimination for LGBT people (note: everyone should be treated equally under the law, IMO, and under the Constitution), and the other thinking she should not have to deal with anyone daring to engage in their 1st Amendment Rights.

Sturtz was escorted out of the room. She said in an interview later she was stunned by Obama’s response.

“She came right down in my face,” Sturtz said. “I was taken aback.”

Sturtz said she told Obama she was happy to take the microphone to plead her case, which, Sturtz said, appeared to fluster the first lady.

It was a planned protest by Sturtz’s group, GetEqual. And it is interesting to see how Liberals and the LGBT supporters react to this. Most have seemed to take the side of Michelle Obama, calling Sturtz rude, at the least. Which is interesting to compare regarding how they idolized people who heckled President Bush and Laura Bush, including the ones who became violent. Yet, can anyone find an example of George and/or Laura acting in the same manner as Michelle? Barack hasn’t typically been graceful when confronted with hecklers, either.

Here’s my favorite comment at Buzzfeed from Bruce Dent

As a gay man, to read the classlessness, and the crude remarks made by gay men and women is horrifying! What is wrong with you people? This President and his first lady have been more supportive aggressively for the LGBT community and you all sound like those idiot republican senators from Texas, or the south! SHUT THE F UP…and learn exactly HOW to get government to actually vote for your causes. You obviously don’t have a clue…Embarrassing.

To which I replied

As a non-gay Conservative man, I find it appalling that the 1st Lady would treat someone exercising their 1st Amendment Rights to petition for redress of grievance and protest peaceably with such disregard and classnessless. And that you, Bruce, would tell people engaged in their 1st Amendment Rights to “STFU”. The president and 1st Lady are not King and Queen, they are our employees, public servants, and should treat protesters with respect.

Does anyone think that either Bush, or any Republican, wouldn’t be excoriated by Liberals, the LGBT community, and the media if they acted in that way? Heck, the media used to love Bush hecklers. Consider their headline for their Michelle O article: First Lady Refuses to Let a Heckler Go Unscolded[4]. ObamaWuv.