A school district in Bozeman, Montana has decided to cancel its participation in the federal school lunch program ruled by First Lady Michelle Obama. Because of this decision the district is being punished by losing about $117,000 in federal education subsidies. And yet, every city that ignores federal immigration laws still gets all the federal cash they want! So, Obama is more interested in forcing “the law” for school lunches than he is for immigration! 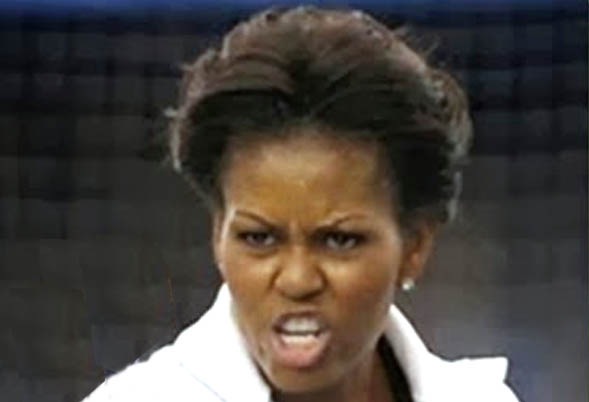 The Bozeman school board decided that there was just too much waste of food going on as its students throw most of the horrible food Michelle “I’ve Never Been Proud of My Country” Obama forces on kids across the country. So, they feel it makes more sense to dump Mean Michelle’s inedible food scheme[1] and put in their own system that will better serve their students.

But the federal government is now in punishment mode.

The Bozeman School Board has voted to discontinue the National School Lunch Program at the high school after deeming the nutrition rules too strict.

The 5-3 vote this past week came after the school’s food program lost $35,000 last year and officials predicted that losses would deepen as federal food rules tighten in the next few years.

While the high school will drop out of the program, the school Board trustees adopted Superintendent Rob Watson’s recommendation that Bozeman’s elementary and middle schools stay in the program.

The Bozeman Chronicle reports that the decision to drop out will mean losing a $117,000 federal subsidy. But officials say it will give the school more flexibility in local food offerings while still maintaining healthy menus.

So, this school will lose money that goes to educate Montana’s kids because Michelle’s putrid school lunch program has been dropped. Yet cities that purposefully ignore immigration laws and become so-called “sanctuary cities” that allow rapists and murderers roam freely through the town killing and raping American citizens at will can still get all the federal funding they want?

This is Obama’s America, folks.