MoveOn.org To Defund Dems Who Oppose Iran Deal By Withholding $10M In Donations

Marxist tried and true political extortion.[1] This time it’s blatant. MoveOn.org is threatening Democratic political opponents of Obama’s Iran deal with having their eight million members withhold contributions to their senatorial campaigns. That’s about $10 million or so. That’s the lifeblood of most of these politicians and many will almost certainly bow to this extortion. Don’t be fooled by Chuck Schumer… what he is doing is all smoke and mirrors. I don’t believe he has suddenly grown a conscience and a soul. He’s being given political cover by Obama. Fake threats are being thrown about as part of political theater. However, I do believe others taking a stand are being financially threatened here. Some things are more important than money and political aspirations. Like say… the survival of your country that is in the nuclear crosshairs of Iran. 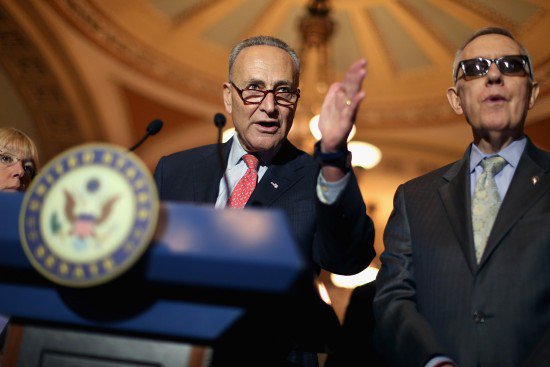 Preserving the legacy of Obama.

Within minutes of Sen. Chuck Schumer’s announcement Thursday night that he will oppose President Obama’s nuclear deal with Iran, progressive advocacy group MoveOn — which has been lobbying in support of the deal — urged its eight million members to withhold campaign contributions from Democratic candidates against the deal.

The group’s “Democratic Party donor strike” aims to secure commitments from its members to withhold $10 million in contributions from lawmakers and party committees. That figure is not what MoveOn as an organization would withhold from candidates and committees, but rather what individual MoveOn members would potentially withhold collectively.

“We will organize grassroots progressives across the country to withhold campaign contributions from the Democratic Senatorial Campaign Committee and from any Democratic candidate who succeeds in undermining the president’s diplomacy with Iran,” MoveOn said in a statement. “Our goal will be to secure commitments to withhold $10 million in contributions within 72 hours after this campaign launches.”

MoveOn is known more for its grassroots organizing than for being a major political contributor. In the 2014 election cycle, MoveOn gave $125,000 and bundled $644,160 for House and Senate Democrats. In the 2012 cycle, the group gave $701,634 and bundled just over $4.5 million — $2 million of which was for Sen. Elizabeth Warren (D-Mass.) — for House and Senate Democrats, according to the Center for Responsive Politics.

The Progressives are determined to make Iran a nuclear power. It’s insane and suicidal, but they are all in and backing Barack Obama and his Islamist agenda. Frankly, I don’t give a rip what MoveOn.org does. For some unknown reason, they have me on their mailing list. I stay on it for the laugh factor. Let them go around goose-stepping and bullying people in the Democrat Party. It shows them for the thugs they really are and it exposes those that bend to their will. Why not? It’s worked so well for Barack Obama and his cronies. He’s used Chicago mafia tactics flawlessly. Why do you think Mitch McConnell and John Boehner are behaving as they do? They didn’t just wake up one day a year ago and heart Obama and his policies. Something changed and both of them are now kneeling before a dictator. MoveOn.org is just one more weapon in a Marxist regime to keep the troops in line.