Sometimes a celebrity will Tweet something, so blatantly a-historical, something so totally outrageous and insensible, that even they realize how bad it is and will try to delete it right away. But someone will always be there to preserve the evidence.

Well, MSNBC’s Ed Schultz just found out that Twitter is forever when he Tweeted that gays were “really” the ones persecuted during Hitler’s holocaust. Seriously. A guy with a German surname just said that. In public.

The MSNBC host Goodwined[1] himself before anyone else even said a word with a Tweet where he informed the world of who was the “real” target of Hitler’s Final Solution.

“Gay people were really the ones being persecuted in Hitler’s Germany,” Schultz blurted out on his EdShow Twitter feed at ten to 5 PM on May 12.

Schultz accompanied his Tweet with an image of a webpage that reported on the thousands of gays that the Nazis reportedly put to death or otherwise interned in their odious death camps.

Schultz deleted the offensive and historically ignorant Tweet only minutes later, but Twitter user Calle_Elefante took a screen shot[2] of the outrageous message and saved it for the ages. 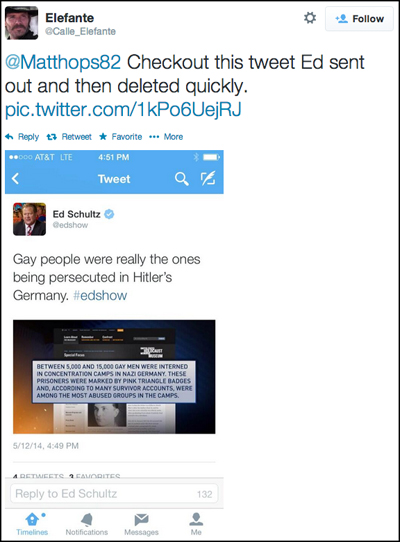 Now, it is wholly true that the Nazis eliminated thousands of gays during WWII. They also killed thousands of Gypsies, people with physical and mental disabilities, and many, many people from other ethnic groups. The deaths of these people must never be diminished.

But those categories of people were not the principal reason for the Final Solution. Jews were always the prime targets of Hitler’s mass murders. There is simply no logical, legitimate, or moral way to make gays out to be a higher target of the Nazis. If 15,000 gays were killed, this is a crime, without doubt. But this number pales in comparison to the millions of Jews who died at Hitler’s hands.

It is sad to have to put this discussion into terms of such cold, hard numbers–and one would think it would be so obvious that the effort would be unnecessary. But it is an outrage to say that gays were more of a target than Jews in WWII Germany and its occupied areas.

Hitler’s whole horrid history in WWII is a crime against humanity, certainly. Each person terminated in the Nazi death camps was wronged no matter their race, color or creed. But facts are facts. The Jews were “real the ones being persecuted” during the Holocaust, Ed Schultz.