Yeah, let’s burn those books, baby![1] Let’s expunge that history. The Leftists want to eradicate ANY memory or history of any American who ever stood up to the federal government. This is insane. The NAACP wants to remove all Confederate symbols from the state of Georgia – revise their history and wipe it clean. They even want to sandblast the Stone Mountain carving. All of this run amok political correctness in the name of race – but that is only a facade. The real issue here is getting rid of independence, of history, of culture. It’s exactly what Barack Obama promised come to fruition. Welcome to the new America where Constitutional rights mean nothing and censorship is the meme of the day. 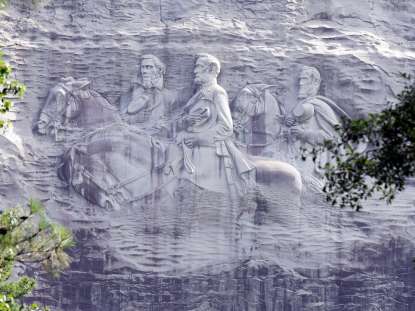 Associated Press
The Atlanta NAACP is assembling a list of all confederate symbols on Georgia’s state lands in hopes of seeing them all removed.

ATLANTA — The president of the Atlanta NAACP says the group wants Confederate symbols — including a giant carving at Stone Mountain Park — removed from all government-owned property and plans to pursue making those changes during the next legislative session.

Some who support flying the battle flag say the symbol represents Southern heritage and pride in Civil War-era leaders. However, Atlanta NAACP President Richard Rose and others have argued the flag is a divisive symbol and white supremacy is at the heart of the heritage the flag celebrates.

The Confederate battle flag has come under renewed scrutiny in the weeks since nine black churchgoers were fatally shot during Bible study in Charleston, South Carolina.

Dylann Storm Roof, a white man who was photographed with the flag several times, is charged in the shooting deaths and authorities are investigating the killings as a hate crime.

Stone Mountain — roughly 15 miles east of downtown Atlanta — features a large carving of Jefferson Davis, who was president of the Confederacy, and generals Robert E. Lee and Thomas “Stonewall” Jackson. The Ku Klux Klan also once held notorious cross-burnings and organizational meetings there.

A battle flag at the park was stolen from its pole but was replaced less than an hour after authorities noticed it was missing, Stone Mountain Memorial Association spokesman John Bankhead said last week.

Although the park is state property, it doesn’t receive state funding and operates by using entrance fees and other income the park generates, Bankhead said. Any changes at the park would also require approval from the Georgia General Assembly, he said.

Although the carving may be one of the most recognizable tributes to the Confederacy in the metro Atlanta area, the Atlanta NAACP’s call to remove the flag and memorials from state property extends beyond that to all state property and land, Rose said.

“We’ll be making a list as we get people from across the state to take pictures and send us locations of various monuments,” Rose said, noting that not all tributes to the Confederacy on government property are historical sites.

Calls to eliminate use of the Confederate battle flag and other symbols since the massacre have prompted changes in several states. South Carolina lawmakers recently voted to remove a battle flag from the state Capitol grounds after one had been flying there for more than 50 years. The flag was moved to a room with other Civil War-era relics.

South Carolina’s leaders first flew the battle flag over the Statehouse dome in 1961 to mark the 100th anniversary of the Civil War. Critics said it remained there to represent official opposition to the civil rights movement. In 2000 the flag was moved to a 30-foot pole next to a Confederate memorial outside the Statehouse, where it flew until lawmakers this year voted to take it down.

In Georgia, some lawmakers have called for the state to eliminate Confederate Memorial Day and Confederate History Month.

Gov. Nathan Deal said in June that he would seek a redesign of a Sons of Confederate Veterans’ specialty license plate. State Sen. Vincent Fort, D-Atlanta, has said the governor should eliminate it.

The plate is also listed in state law, but the Georgia Department of Revenue is responsible for issuing final approval for the plates’ design.

It’s not only Georgia – this has spread nationwide. Every aspect of America’s greatness is being attacked… our rights, our religion, our history, our military… It would seem that businesses and those who court favor with the government for money and power just can’t line up fast enough for Obama’s fascism. It’s so very reminiscent of 1939 Germany. Roof’s butchery was a convenient excuse to go on a witch hunt, starting with the Confederate flag. But there are plenty of people and ideas to burn at the stake. They are making ‘lists’ after all. The NAACP has morphed into a propagandic militaristic arm of the Obama Administration. A hundred years before the advent of Hitler[3], the German-Jewish poet, Heinrich Heine, had declared: “Wherever books are burned, human beings are destined to be burned too.” On the night of May 10, 1933, an event unseen in Europe since the Middle Ages occurred as German students from universities once regarded as among the finest in the world, gathered in Berlin to burn books with “unGerman” ideas. And so it goes in America in 2015, where the radicals gather to eradicate “unAmerican” ideas and history.