Voting for this guy is functionally and morally no different than voting for a leader of the Ku Klux Klan[1]. He’s just as vile, just as racist, just as bad — but he’s black instead of white. So, why do liberals give scumbags like this a free pass? 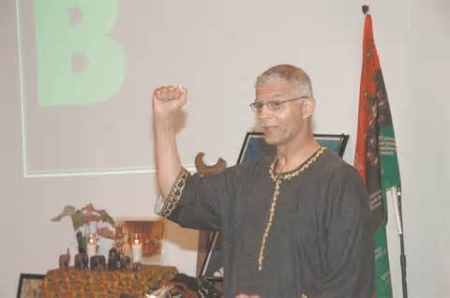 Voters in Jackson, Miss., a mid-sized city in the heart of the Deep South, have picked a Democrat as their mayor. What’s different about this individual is that he is a former leader of the Republic of New Afrika, a group dedicated to creating an independent black nation out of five southern states.

Now leading the city of about 175,000 is Chokwe Lumumba — who has a long history of radical activism and whose plans for the largest city in Mississippi could be called “revolutionary.”

A co-founder of the Malcolm X Grassroots Movement, which promotes black “self-determination,” Lumumba was sworn in on July 1, after winning 86 percent of the vote in the general election.

…One of Lumumba’s primary goals as mayor of Jackson is to create a “solidarity economy” in the city. According to a report published by the Belfast Telegraph, a solidarity economy is an “umbrella term used to describe a wide variety of alternative economic activities, including worker-owned co-operatives, co-operative banks, peer lending, community land trusts, participatory budgeting and fair trade.”

Lumumba also has earned the highest praise from the Final Call, the official publication of the Nation of Islam, which called his electoral victory one of the “most important progressive political victories on a long list of important political leaders.”

…During his career as an attorney, Final Call reported, he represented members of the Black Liberation Army, and he was vice president of the “Republic of New Afrika,” which claimed Alabama, Georgia, Louisiana, Mississippi and South Carolina to be the home of a new “black nation.”

Safest prediction ever: This guy will be a disaster for Jackson, Miss and he’ll blame white people for the whole mess.