Wow… looks like we are going to have a populist race[1] on our hands, both on the Left and the Right. Who knew that socialist Sanders would sweep the nation on the Left? He’s basically a communist and they are thronging to the guy. Unbelievable. But then you have Trump and I firmly believe he will wipe the floor with the likes of Bernie Sanders. But then again, I didn’t think Obama could win – twice. The Labour Party in Britain just elected the equivalent of Sanders. If we aren’t careful, Islamism and communism will sweep the planet wiping away the free world. I hope Trump wins by a landslide if he gets the nod. Clinton should call it a day. 22 points – if that isn’t a death knell politically, I don’t know what is.

The first wave of the YouGov/CBS News Battleground Tracker polled primary and caucus voters from both parties in Iowa, New Hampshire and South Carolina

Hillary Clinton’s deficit among likely Democratic primary voters in New Hampshire has grown to more than 20 points, while her lead over Bernie Sanders among likely caucus voters in Iowa has been reversed, according to the first wave of the YouGov/CBS News 2016 Battleground Tracker. Clinton remains ahead in South Carolina, where Joe Biden also makes a strong showing.

The new poll finds Sen. Sanders with 52% support among Democratic primary voters in New Hampshire, while former Secretary of State Clinton, long considered the front-runner for the 2016 Democratic nomination, receives 30%. Recent polls have shown Sanders’ lead growing in the Granite State, but this would be the first to show the Vermont Senator over 50%.

Possibly more worrying for the Clinton campaign is her performance in Iowa, where Sanders now leads by 10 points, with 43% to Clinton’s 33%.

Until recently Clinton had retained an edge in Iowa, the other first-in-the-nation voting state along with New Hampshire. A recent CNN/ORC poll found the pair tied among likely Iowa caucus voters.

Vice President Joe Biden, who is rumored to be considering a run for the White House in 2016, receives only 10% support from Democrats in Iowa and 9% in New Hampshire placing him third in both states. Biden’s best performance is in South Carolina, where he has the backing of 22% of Democratic primary voters, matching Sanders’ 23%. Yet Clinton remains firmly in the lead there with 46% support. 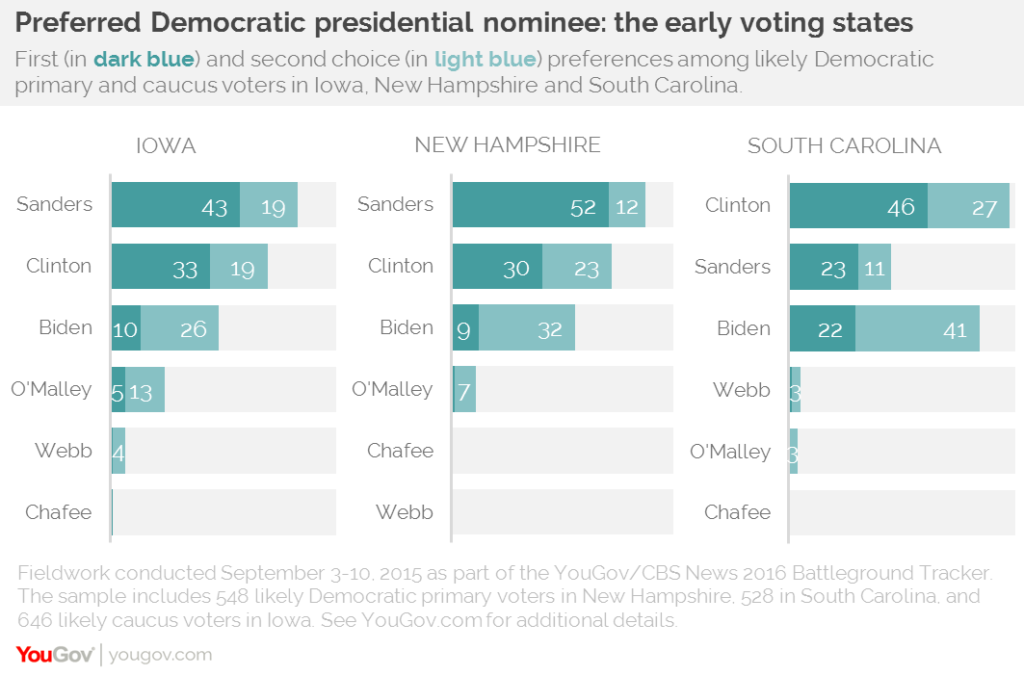 While Democrats Iowa and New Hampshire are overwhelmingly white, South Carolina is the first early state with a significant minority population – over half of likely Democratic primary voters in the Palmetto State are African-American, a group with whom Clinton retains strong support. Indeed Sanders has a narrow lead over Clinton among white North Carolina Democrats (46%-39%), but trails Clinton by 48 points among blacks.

Another demographic with whom Clinton has received disproportionate support is with women, and that mostly remains the case here. Clinton’s support is 7 points higher among Iowa women than men. The gender gap is larger in New Hampshire (12 points) and insignificant in South Carolina (4 points). By contrast, Bernie Sanders performs particularly well with Democratic men – though Clinton trails by only 11 points among women in New Hampshire she trails by a mammoth 38 points among men.

The YouGov/CBS News 2016 Battleground Tracker is based on surveys of registered voters who had previously voted in primaries in Iowa, New Hampshire and South Carolina. The poll was conducted online but included registered voters who were contacted by phone. The sample includes 548 likely Democratic primary voters in New Hampshire, 528 in South Carolina, and 646 likely caucus voters in Iowa. See a more detailed description of the methodology used here.

On the GOP side, Donald Trump continues to soar. But according to the poll, the outspoken billionaire is now joined in the top tier by another candidate from beyond the Beltway – former neurosurgeon Ben Carson.

Carson also comes in a strong second in South Carolina, where 21% of likely Republican primary voters back him and 36% back Trump. Sen. Ted Cruz is a distant third with 6%. 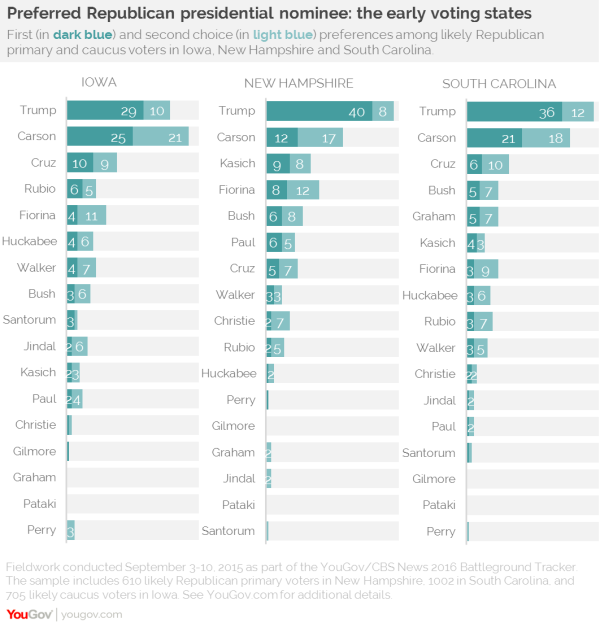 Trump’s most substantial lead is in New Hampshire, where he has the support of 40% of likely Republican primary voters. Carson comes in second again, but by a much greater distance, with only 12% support and a smattering of other candidates close behind him, including John Kasich at 9% and Carly Fiorina at 8%. Jeb Bush, who led most polls in New Hampshire throughout the early summer, is tied for fifth with Rand Paul, at 6%.

Notably, three of the top four candidates in New Hampshire have never held elected office (John Kasich, Ohio’s governor, is the exception) and in all three early states polled the majority of Republicans back one of two “non-politicians” – Trump or Carson – with every other candidate in single digits. Data elsewhere in the poll sheds some light on the phenomenon. Asked which one of four candidate qualities is most important to deciding their vote, Republican voters cited experience “getting things done” in the private sector more often than political acumen in all three states.

Rick Perry dropped out of the Republican race the day after the fieldwork for this poll was completed. It appears unlikely, however, that his exclusion would have had a significant impact on these findings; the former Texas governor never received more than 1% of first-choice preferences in any of the three states polled.

The Republican portion of the sample includes 610 likely Republican primary voters in New Hampshire, 1002 in South Carolina, and 705 likely caucus voters in Iowa.

Wonder if Sanders gets the nod, if he’ll do like Corbyn did in Britain and join in a rousing rendition of the traditional socialist anthem “The Red Flag[5].” That would be fitting. Do these people even understand what they are supporting? Trevor Loudon points out[6] that Democratic Socialists of America’s support for Presidential candidate Bernie Sanders has been explicit. America’s Gramsciist communists want their long time ally Sanders in the White House. He has a 30 year alliance with America’s largest Marxist organization. And unless a conservative stops him, he’ll bring Marxist death to America.