The Internet is abuzz with news of a new Obama campaign smart phone app that identifies all the Democrats in your neighborhood. 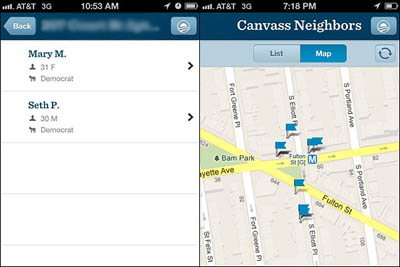 Released last week, the app works through Google maps. Upon entering an address, the app reveals the registered Democrats nearby, names them, and notes their sex and age. Consequently, it will also inform you of which households aren’t registered Democrats by process of elimination and by seeing those houses not identified as Democrats!

For each Democrat ID a map “flagpin” appears along with information about the voter that lives there. For instance, you might get info about Lori C., age 58, Female, Democrat. Her info appears on your screen as “Lori C. 58 F Democrat.”

Some voters are a bit uneasy that just anyone can so easily look up their voter information on a smart phone app.

Propublica contacted[1] the “Lori C.” mentioned above and she said she was a bit “creeped out” over the whole thing.

“I do think it’s something useful for them, but it’s also creepy,” said Lori Carena, 58, a long-time Brooklyn resident, when she was shown the app. “My neighbors across the street can know that I’m a Democrat. I’m not sure I like that.”

This is all public information and is the sort of targeted voter info that all campaigns use in some way or another, whether for mailed ads or door-to-door visits. In the past campaigns had to go to a County Clerk’s office or a Secretary of State’s office to get this voter information and usually this information was doled out to campaign workers only and was not available in such a public manner.

For those curious about safety concerns, the Obama campaign said it has safeguards built into the app. If too many addresses are entered in a short period of time, for instance, the app will shut down. Those identified by the app can also request to be removed from the app’s search parameters, campaign spokesmen said.

“The campaign is strongly committed to ensuring the safety and privacy of the public and follows up with appropriate action, including alerting appropriate authorities if necessary, in any case of abuse or inappropriate behavior,” said the [Obama campaign] spokesperson. “Any voter who requests not to be contacted again is immediately removed from any provided to volunteers.”

Of course, the ease of using a smart phone app to identify neighbors and their voting affiliation does raise privacy concerns and the “safety” features don’t satisfy everyone that this app is a good idea.

It is one thing if a campaign has to go to the trouble of going to a government office to obtain all this voting info for their targeted campaign efforts, but quite another if just anyone can do the same thing in seconds on an iPhone.

The ease of use of this app would seem to lend itself to abuse. Some barriers such as the effort it takes to get the info seems as if it might limit abuse to some degree, but if voter info is so easy to find with this app it might open up far more avenues for abuse than one might think.

In fact, Propublica notes a university professor that thinks it’s great that people can so easily find out the voting affiliation of their neighbors. He thinks it’s a wonderful idea to be able to harass neighbors that don’t agree with you politically and suggests that such unsolicited interaction should is justifiable under the guise of dialog.