Some new polling shows that Hillary is lagging behind many of the Republican candidates in some of the key battleground states as she gears up for a “do over” re-launch of her foundering campaign. 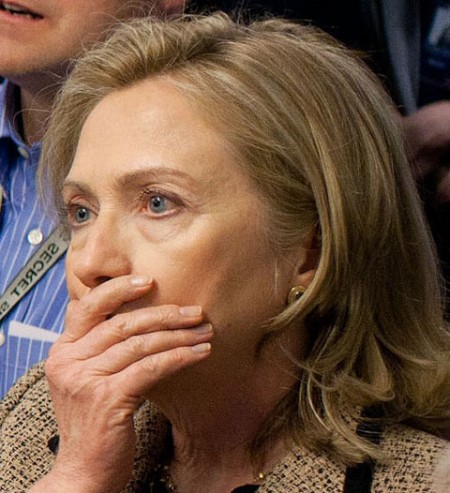 It is way too early to say what polling this means[1], granted, but Hillary must be feeling pressure. We can say that with this crazy re-boot of her campaign that is only a few months old… and it’s a reboot before she even has too much opposition from other Democrats in the primary.

As Hillary Clinton gears up to reboot her historic but underwhelming presidential campaign with a dramatic New York City speech on Saturday, poll numbers show she might need more than a Big Apple skyline to motivate voters next year in key swing states.

Polling data collected this month by Vox Populi Polling in the six battleground states most likely to determine the 2016 presidential election show that Clinton trails a generic Republican candidate by 1 percentage point overall.

The 46–47 showing for the former secretary of state is a departure from nearly every poll since March that asked voters to choose between Clinton and a specific GOP candidate. Only Jeb Bush, the former Florida governor, has posted a winning margin against Clinton, and that was a month ago in a Fox News poll.

Clinton’s suddenly flagging performance in a hypothetical contest against a Republican – who is still unnamed – threatens to throw cold water on her big coming-out moment.

‘Sure it’s a challenge, and a big one,’ a Democratic campaign consultant in New Hampshire told Daily Mail Online on background. ‘I mean, look – we were hoping she’d run the table and lead wire-to-wire, but her negatives are high so it’s going to be a long year-and-a-half.’

Anyway, this story is only a reminder that nothing is set in stone for 2016 yet. In fact, there is still time for Hillary to drop out of this and/or lose her nomination to another Democrat.