New York Mayor Red Bill de Blasio[1] is a slimy worm. He’s an absolutely despicable human being and I pity sane New Yorkers who have to live with him. Immediately after a police officer was executed in her car on the streets of New York, comrade de Blasio jetted off to Germany to protest President Trump at the G20. He also missed out on the swearing in of 524 new NYPD recruits. This is a man (and I use the term loosely) that hates the police in his own city. You didn’t hear about that poor police officer on any of the mainstream media. I think one channel did 90 seconds on it. Only Fox News covered the story. Just disgraceful… de Blasio and his weaponized media quashed the story.

Officer Miosotis Familia[2] was a proud officer of the NYPD for 12 years. She has three children that she leaves behind. The thug that killed her is now dead, but that is little comfort here. It was an assassination by a leftist radical that hates cops. Just the kind of guy that de Blasio hearts. De Blasio joins thousands of Antifa fascists and anarchists protesting world leaders… he’s probably having the violent time of his life there with his fellow communists. 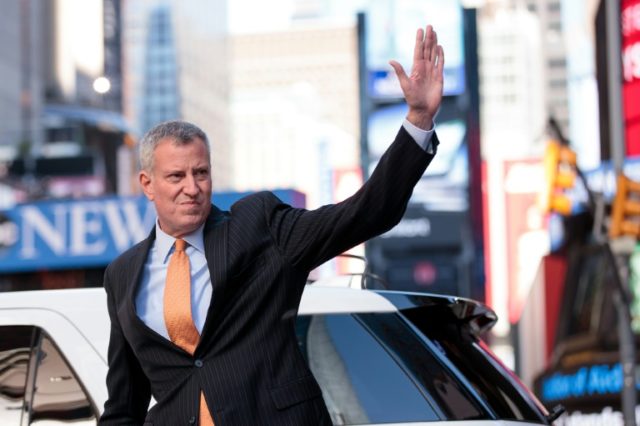 His decision to skip off comes one day after a police officer was murdered in the Bronx, and it also meant he missed a swearing in ceremony for 524 new NYPD recruits in order to catch his flight.

The rally, which translates into “Hamburg Shows Attitude,” is in protest against a range of world leaders descending on the city, which includes Trump, Russian President Vladimir Putin, Chinese President Xi Jinping, and Turkish President Recep Tayyip Erdogan.

Images from the first rally show around 12,000 people, many of whom are far-left militants, turning violent with police being forced to use water cannons and tear gas to control the crowd. One banner held up read: “G20 WELCOME TO HELL.”

The protests are aptly nick named “Welcome to Hell.” They must have had de Blasio in mind. Somebody, ANYBODY, needs to replace this asshat. New York Assemblywoman Nicole Malliotakis is looking to do just that. She will run as the Republican candidate against Red Bill next November. She torched him for fixating on protesting Trump, versus addressing more pressing issues back home in New York. I’ll bet he got New York to pay for his trip. “Unbelievable. Instead of jet-setting around the world, he should be here doing his job,” Malliotakis said. “A police officer was murdered, street homelessness has skyrocketed and people continue to get delayed on the trains.” But de Blasio doesn’t give a flying crap about any of that… he wants to ‘get’ Trump.

And Malliotakis had more to say concerning the NYPD swearing-in ceremony: “Of course I would have been there. The mayor should be embarrassed by the way he has treated the men and women of our police department.” He’s made no bones about hating the police and loving Black Lives Matter. That’s no secret especially to the officers of the NYPD. Mayoral spokesman Eric Phillips claims that the organizers of the rally picked up the tab for de Blasio. Right.

The homeless population in New York has increased by a stunning 40 percent this year alone. Rising from 2,794 in 2016 to 3,892 in 2017. And instead of de Blasio doing his freaking job and addressing the issue, he’s off gallivanting with thugs in masks, throwing Molotov cocktails and preaching subversion of a sitting President of the United States. What a treasonous, evil Marxist this man is.