There has been much speculation in the media on why Obama’s current scandal of the IRS targeting conservative groups for attack didn’t come out last year when the initial flurry of reportage on the incident was seen. Well, The New York Times thinks it has the answer: it was Rush Limbaugh’s fault. 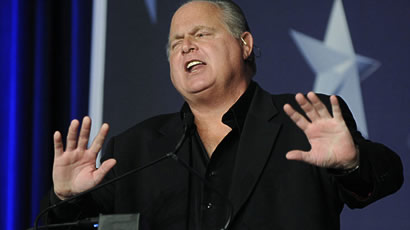 When the IRS finally admitted these last few weeks that it had, indeed, unfairly targeted conservative groups[2]–most especially during the 2012 election cycle–many pointed out that this targeting was being complained about for some time. But why did the scandal just break big now, in May of 2013, when stories about it go back several years?

The paper of record pondered this very question in a May 21 piece[3] by Michael D. Shear that places the blame on Limbaugh. It’s all because of “slutgate,” Shear claims.

The Times points out that in March of 2012, Representative Charles Boustany, Jr. (R, LA) held a hearing on the IRS targeting but the story got little traction. Shear quotes several parties to the effect that it was a “dog-bites-man story” in that the media wasn’t interested in talking about Tea Party groups complaining about the IRS.

So, what stories did hold the media’s attention during Boustany’s 2012 hearing? Rush Limbaugh’s media manufactured “slutgate.”[4]

It was during the first week of March that Rush Limbaugh ridiculed abortion mill supporter Sandra Fluke for being a “slut” because she wanted the U.S. government to pay for her contraception.

The media, of course, went into a feeding frenzy on “slutgate” to the point that Rush eventually apologized for his over-the-top characterization of the abortionist. It was all the media could talk about at the time.

This and a few other issues, the Times said, overshadowed Boustany’s investigation into the IRS. The paper also notes that most news outlets just didn’t care about the story preferring to tell other tales and blowing off Tea Party complaints against the IRS as mere election year posturing. Not to mention that it was a yawn-worthy tale being all too common anti-IRS carping from the right.

Of course, a closer read of the Times’ piece reveals the real reason the IRS story was ignored. The media didn’t care about the IRS attacking conservatives. It really had little to do with Rush Limbaugh.

It took the IRS actually admitting its guilt before the media deigned to pay attention to this story. And so conveniently that they did so after the election was over.