‘New York Times’ Wants Detroit to be Settled by Muslims

We all know that Democrats have destroyed Detroit and turned it into a blighted landscape. But now the Democrat supporters at The New York Times think it is a great idea to import thousands of Syrian Muslims to settle in Detroit and help rebuild it. 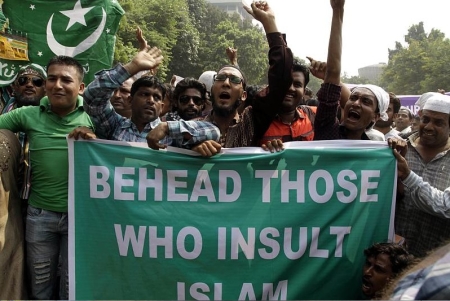 Certainly many of those would-be Syrian immigrants would be Christians as half the country is Christian. But without controls, Syrians who are Muslim would also be coming here with this plan. Do we want to import more Islamists[1] into the USA? Because whether we would want terror-supporting Muslims to come here or not, any plan to bring unscreened Syrians here WOULD be importing Islamists.

Syrian refugees would be an ideal community to realize this goal, as Arab-Americans are already a vibrant and successful presence in the Detroit metropolitan area. A 2003 survey by the University of Michigan of 1,016 members of this community (58 percent of whom were Christian, and 42 percent Muslim) found that 19 percent were entrepreneurs and that the median household income was $50,000 to $75,000 per year.

What confidence can we have that traumatized war refugees can be transformed into budding American entrepreneurs? We cannot know for sure. But recent evidence of recaptured children from the clutches of the Lord’s Resistance Army in Uganda and victims of violent crime across five continents reveals that they become more active citizens than similar compatriots who have not suffered from these traumatic events. In the Zaatari Refugee Camp in Jordan, Syrians, despite psychological scars and limited resources, have set up 3,500 shops, stores and other businesses.

Unless you screen out Muslim newcomers, this plan would be a disastrous idea. Bringing in millions more Muslims into the USA absolutely means we will be importing terrorists. It just can’t be avoided. Will they all be terrorists? Certainly not. But SOME will be. We’ve already seen American converts to Islam turn to terror. It is indisputable that increasing immigration from areas of the world that is heavily Muslim will mean that some terrorists will be injected into our heartland.

Just ask Minneapolis how the influx of Muslims from Africa is working out for them.