Newspaper Vandalized for Using the Word “Illegals” Refuses to Back Down

You may recall the California newspaper that had its headquarters vandalized by activists who support lawbreaking illegal immigrants. The illegals attacked the paper for daring to use the word “illegal” in its reporting on immigration. Well, now the paper is saying it won’t back down and will continue to use the word “illegal” to describe illegal immigrants. 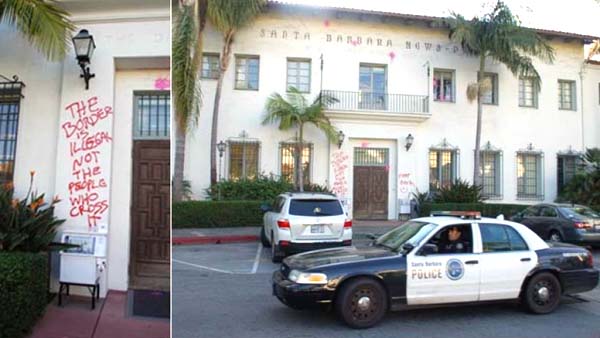 Early this year around the same time the world was consumed with the news of the Charlie Hebdo attacks in France, the Santa Barbara News-Press had its building defaced by supporters of illegal immigrants. But now they say they won’t buckle[1] to pressure from activists who support breaking our laws.

A California newspaper, the Santa Barbara News-Press, recently featured front-page headlines that used the word “illegals” to describe immigrants who are living in the United States illegally.

Several days after the first headline ran, the newspaper’s offices were vandalized with paintball splatters and graffiti that read: “Fight back” and “The border is illegal not the people who cross it.”

In the following days, demonstrators gathered outside the building, chanting and marching in protest of the “racist” word “illegals,” while others came out in support of the paper.

Another more recent front-page article that featured the word “illegals” was written by Scott Steepleton, the city editor at News-Press.

Steepleton asserted on “Fox and Friends Weekend” this morning that the newspaper used an appropriate term to describe people who are living in the country illegally.

He added that News-Press has used the word “illegals” for at least 10 years and they are standing by their choice of language.

He said he believes that many other newspapers and editors have changed their language due to pressure from the public.

“We are a private business in the United States of America in the state of California and we are choosing to run ourselves the way we see fit,” Steepleton stated.