The Old Media is still acting shocked, SHOCKED I tell you, that the Obama administration treats them like a redheaded stepchild. Newsweek’s The Daily Beast[1], for instance, is incredulous at the “reprehensible” actions of the Obama White House for having the temerity to call NBC to scold the cabler over Mark Halperin’s “dick” comment.

You’ll all certainly recall the incident in question. Back on June 30, MSNBC news analyst Mark Halperin unleashed the “d” word on President Obama in an appearance on the cable station’s Morning Joe talk show. Halperin was asked how he thought Obama did in his June 29 press conference and in reply Halperin joked that Obama had been “a dick.”

From there Halperin’s world went topsy turvy to the point where everyone was apologizing on the set of the TV show and only hours later MSNBC was suspending its analyst “indefinitely.”

But one other little part of this story is what brought the ire of Newsweek’s Douglas Schoen and Judith Miller and for good reason, too. The White House called NBC to complain about Halperin’s language. How is it possible, Newsweek wondered, that the White House was so bold as to attempt to intimidate NBC? Worse, why did NBC buckle under that pressure?

The fact that NBC appears to have been so easily intimidated by a phone call from the White House press secretary seems at least as reprehensible, if not more so, than Halperin’s profane reference to Mr. Obama.

The Newsweek team also felt that the offense was not nearly so offensive to deserve the ton of bricks that fell down upon Halperin’s head. They point out, as many have, that Halperin did warn the control room to ready the delay button so as to bleep out his off color comment.

One has to have a tiny bit of sympathy for Halperin, to be sure. After all, MSNBC and NBC both spent the last 10 years calling George W. Bush a murderer, a traitor, a liar, and any manner of vile thing. Even today all the news divisions are calling Republicans terrorists and “hostage takers” simply because the GOP finally wants to cut the wild spending congress has indulged for the last 100 years. And not one of those other TV talking heads ever got as much as a slap on the wrist for their outrageous name-calling and over-the-top rhetoric. Halperin calls the Obammessiah one little off color name (and one of the least offensive ones at that) and he is banished to the gulag in double quick time.

It truly is a mystery (that would be sarcasm, there).

Still, it is interesting that the White House felt it had a role in scolding NBC through official channels. It bespeaks of Obama’s arrogance, certainly.

Schoen and Miller wrap up their report thus:

Indeed, the fact that NBC appears to be taking its cues from the White House and effectively chilling speech it finds objectionable speaks volumes about the state of political discourse and dialogue in America. That should trouble Americans more than Halperin’s potty mouth or an MSNBC producer’s inability to push the proper button.

But no one should be surprised by Obama’s arrogance in this. It all fits easily with the contempt that Obama has shown the Old Media since day one. As I reported last week[2], Obama has ignored reporters, he’s refused to engage in friendly patter, he’s remained aloof and distant, he’s banned some, had folks in his administration ban others, he’s blocked them, he’s excluded them in favor of his own “reporters,” he’s smart-mouthed them and given them short shrift, and he’s done his level best to so control the message that the press corps ends up having less access than they have had with other presidents.

The Old Media has complained about Obama’s arrogant treatment of them since 2006. However, every single time the Old Media reports yet another Obama slight against them, they act as if it is an incident in isolation. Unlike how they’d be acting if Obama were a Republican, constantly adding up and cataloging each slight, hoarding them and showcasing the collection with each new incident, the Old Media gives Obama a complete pass on the nearly daily mounting number of his slams on their brethren.

Notice even Schoen and Miller limit their discussion to this one incident? Their report could have been sussed out further by reporting the dozens of other slights that team Obama has delivered to the media. But even as they complain, Schoen and Miller ignore the long chain of other incidents when Obama gave the media the back of his hand. (Again, if you want to see a few of these incidents, check out my previous reports, here[3])

But, as always, even when they are scolding him, the Old Media essentially gives Obama a free pass. 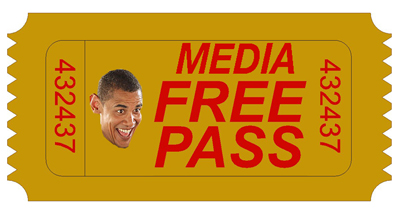